Days of Our Lives Spoilers: Eve Thrown in Prison for Jennifer’s Attempted Murder – Time Jump Reveals Cops Got It Wrong? 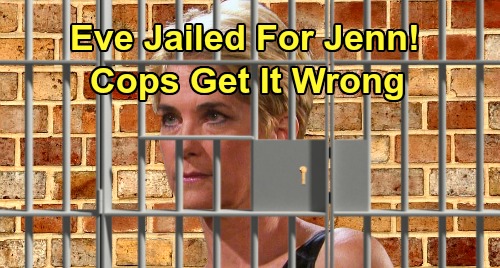 Days of Our Lives (DOOL) spoilers tease that Eve Donovan’s (Kassie DePaiva) drunken outbursts could come back to bite her. She was a plastered mess at the pub, where Roman Brady (Josh Taylor) cut her off and tried to offer advice. He pushed Eve to let go of her grudges and move on with her life, but Eve was adamant that the wrong person fell down that elevator shaft – meaning Jack Deveraux (Matthew Ashford) at the time of his presumed demise.

Eve felt like if anyone deserved to be crushed to death, it was Jennifer Horton (Melissa Reeves). That was mistake number one! Roman couldn’t believe Eve would actually say such a thing, but she didn’t stop there. At the double wedding, Eve drunkenly claimed to be pregnant with Jack’s baby. When nobody bought it, a frustrated Eve insisted Jennifer should go ahead and marry Jack again. She put a heavy emphasis on “’til death do you part.” That was mistake number two.

You might say Eve’s third mistake is having a hotel room so close to the bistro, where Jennifer went plummeting off the balcony. We’ll even throw in a fourth mistake of being so drunk that she probably can’t remember what truly transpired – at least not as far as the cops will be concerned. Maggie Kiriakis (Suzanne Rogers) helped Eve back to her room, but she can’t vouch for what Eve did next.

DOOL fans can probably see where we’re going with this! There’s a good chance Eve will be accused of Jennifer’s attempted murder. Days viewers know it was Princess Gina (Kristian Alfonso) who shoved Jenn, but she’ll be still roaming around free after the time jump. Someone else will be locked up for the crime – and the Salem PD has every reason to suspect Eve.

Jennifer will be in a coma on November 8, which is when the time jump’s set to happen. Some bombshells will result during the week of November 11-15. That’s when Jennifer will awaken and learn the person who tried to kill her is behind bars. Jack will deliver this news, but he’ll obviously have it wrong since Princess Gina will remain out in the world.

That same week, Days of Our Lives spoilers say Justin Kiriakis (Wally Kurth) will have some positive updates for Eve. It seems likely that Justin will be serving as Eve’s lawyer, so he may learn Jennifer’s awake and fill Eve in. Eve may hope Jennifer can clear her name, but things could be tricky since Jenn was in a coma. Jennifer may be fuzzy on exactly what transpired right before her horrific fall.