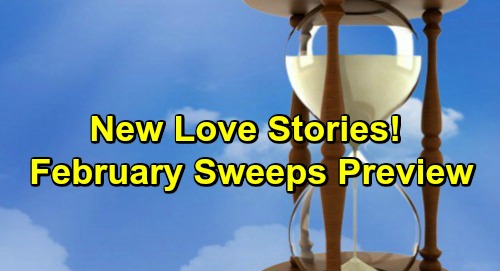 Days of Our Lives (DOOL) spoilers tease that some Salem shockers are on the way. February sweeps will bring some huge story shifts, so DOOL fans will definitely want to check out all the action. If you don’t want to wait to find out what’s coming up, you’re in luck! We’ve got a preview of the hot drama ahead.

For starters, Ciara Brady (Victoria Konefal) will head back home after her visit with Theo Carver (Kyler Pettis). She’s currently hanging out with her ex in South Africa, so Ben Weston (Robert Scott Wilson) isn’t too happy about that. He needs a chance to make amends, but he won’t get one until Ciara returns for a big February sweeps storyline.

Days of Our Lives spoilers say Ciara’s reentrance to the canvas will be explosive. She may be at odds with Ben at first, but they’ll try to make it work eventually. It’s clear that the pull between Ben and Ciara is too strong to ignore.

As for Claire Brady (Olivia Rose Keegan), she’ll finally get what she wants. Tripp Dalton (Lucas Adams) will fall for Claire, but for how long? He’ll also get to know Haley Chen (Thia Megia) soon, so things could get messy. JJ Deveraux (Casey Moss) is currently falling for Haley, so he may be in Claire’s same frustrated boat.

However, Haley was brought in as a love interest for JJ. Even if she gets together with Tripp at some point, he’ll just be an obstacle on the road to Deveraux love. Speaking of Deveraux love, Jennifer Horton (Melissa Reeves) won’t give up on her man! She’ll do everything in her power to reunite with Jack Deveraux (Matthew Ashford), but Eve Donovan (Kassie DePaiva) will have a few tricks up her sleeve.

After Dr. Rolf’s (William Utay) diary lands in Eve’s hands, she’ll have some power. Eve will use that power to her advantage this February, so that’ll bring more complications. Jack will also be pushed to run for mayor, which might be a good move. He’s got the personality for it, especially since he’s so bold and outspoken right now. If Salem wants an honest leader, Jack Deveraux is the right candidate.

Meanwhile, Gabi Hernandez’s (Camila Banus) battle with Stefan DiMera (Tyler Christopher) will bring surprises. It looks like a tricky love connection will form. Over with Abigail Deveraux (Kate Mansi) and Chad DiMera (Billy Flynn), they’ll deal with some corporate chaos and figure out their relationship issues. Their reunion will bring them back to a deep place of love and commitment.

This will likely set up a joint departure for Chad and Abby this spring 2019. Meanwhile, Rafe Hernandez (Galen Gering) will return from an extended trip to help Sami Brady (Alison Sweeney). He’ll be stunned by how close Hope Hernandez (Kristian Alfonso) and Ted Laurent (Gilles Marini) are when he gets back.

Days of Our Lives spoilers say Jordan Ridgeway (Chrishell Hartley) will also return to Salem. She’ll undoubtedly chat with her brother, Ben, and potentially help with a crisis. Will Jordan cross paths with Rafe, too? The timing is right for these exes to face each other again.

Elsewhere, Leo Starke’s (Greg Rikaart) mother will wreak havoc for both her son and “Jarlena.” Diana Cooper (Judith Chapman) will pursue John Black (Drake Hogestyn), who happens to be her former flame. That’ll lead to drama for Dr. Marlena Evans (Deidre Hall), but John and “Doc’s” love should prevail.

That’s it for our February sweeps preview! We’ll give you updates as other Days news comes in. Stay tuned to DOOL and don’t forget to check CDL often for the latest Days of Our Lives spoilers, updates and news.