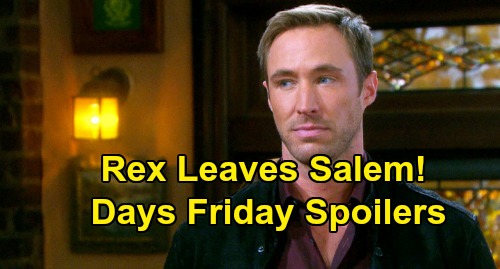 Days of Our Lives (DOOL) spoilers for Friday, August 9, tease that Brady Black (Eric Martsolf) will struggle with his feelings. DOOL fans know “Nicole DiMera” (Arianne Zucker) finally convinced Brady to hit the sheets with her, but it was Kristen DiMera (Stacy Haiduk) he couldn’t get out of his head. The morning after brought some Kristen memories, so Brady knows more than he thinks!

Brady admitted that things felt different with “Nicole” this time around, but he couldn’t really explain why. Of course, it’s because Brady remembers making love to both Kristen and Nicole. He has no idea he just got in bed with Kristen, but he can sense it on a subconscious level.

As a result, Brady’s dealing with a lot and will need someone to confide in. Luckily, Chloe Lane (Nadia Bjorlin) will be glad to lend an ear. Days of Our Lives spoilers say Brady will open up to his friend on Friday. He may confess that he likes the idea of being with “Nicole” and rekindling their spark. However, Brady may find it strange that his mind keeps drifting back toward his manipulative ex.

While Brady mulls over his Kristen dilemma, Rex Brady (Kyle Lowder) will bid Eric Brady (Greg Vaughan) and Sarah Brady (Linsey Godfrey) farewell. He just quit his job at the hospital, so Rex will suggest there’s nothing holding him back. Days of Our Lives spoilers say Rex will offer Sarah a warning before he takes off. He’ll make it clear that Eric’s heart will always belong to Nicole, so Sarah’s destined to get burned.

Other Days spoilers say Roman Brady (Josh Taylor) will have some advice for Sarah and Eric. He may feel a bit caught in the middle since both Rex and Eric are his sons. Nevertheless, Roman’s a supportive guy who just wants his kids to be happy. He may think they all know this is for the best. Sarah loves Eric, not Rex. Their marriage had no chance of lasting long-term, so it’s better that they find that out now.

As for Eric and Sarah, they’ll make a firm commitment to each other. Sarah and Eric will look forward to a bright future, but more drama’s never far behind in Salem. Meanwhile, Anna DiMera (Leann Hunley) will be on a mission. She’ll plan to put Tony DiMera’s (Thaao Penghlis) ashes to rest in the DiMera mausoleum, but she’ll soon discover those aren’t Tony’s ashes at all.

Tony is alive and happens to be married to “Nicole,” but he’ll want out of that marriage ASAP. Alas, Kristen will give him some trouble! Finally, Gabi DiMera (Camila Banus) will remain torn. Stefan DiMera (Brandon Barash) captured part of her heart, but giving him all of it is proving difficult. The newlyweds will bicker in Friday’s episode, but their sexual tension will be bubbling under the surface.

It sounds like another exciting episode’s on the way. We’ll give you updates as other Days news comes in. Stay tuned to DOOL and don’t forget to check CDL often for the latest Days of Our Lives spoilers, updates and news.