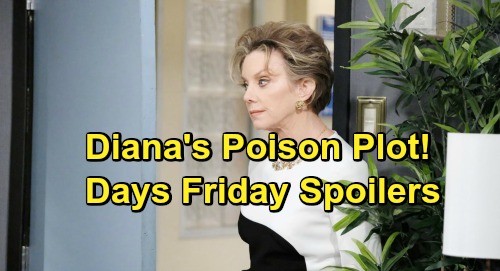 Days of Our Lives (DOOL) spoilers for Friday, March 8, tease that Diana Cooper (Judith Chapman) will settle on the perfect way to get rid of Dr. Marlena Evans (Deidre Hall). Her plan to drive Marlena and John Black (Drake Hogestyn) apart through her paternity claims was a flop. Diana knows she’ll have to take things much further if she wants to sever “Jarlena’s” bond.

DOOL fans can expect a deadly plot to form. Diana will figure out how she intends to kill Marlena and decide on when to make it happen. Days of Our Lives spoilers say Marlena will be poisoned on next week’s new Days episodes, March 11-15, so it looks like Diana will think that method’s her best bet. After all, it isn’t messy and there won’t be a murder weapon that could be traced back to her.

Some twists are coming up in this storyline, but Diana will think she’s got all her bases covered for now. She’ll hope that by the time she’s finished, John and Marlena’s relationship will be over permanently. Diana won’t succeed in killing Marlena, but she’ll definitely give John quite a scare soon enough.

Until then, Days spoilers state that John will get sneaky. Will Horton (Chandler Massey) and Sonny Kiriakis (Freddie Smith) couldn’t score the ammo they needed in Diana’s hotel room. Fortunately, they do know where to find it. There’s a safe in Diana’s room that could solve their Leo Starke (Greg Rikaart) problems, so John will get updates and crack it. He should be surprised by what’s inside.

Over with Jennifer Horton (Melissa Reeves), she’ll rip into Jack Deveraux (Matthew Ashford) once more. Jack has become ruthless in his fight to deport Haley Chen (Thia Megia), so Jennifer will let him know this is uncalled for. She’ll be appalled with Jack for betraying JJ Deveraux’s (Casey Moss) trust and piling on the pain with his current efforts. Jennifer just won’t see any sign of the man Jack used to be.

Across town, Days of Our Lives spoilers say another betrayal will be underway. Claire Brady (Olivia Rose Keegan) will fill Eve Donovan (Kassie DePaiva) in on Haley’s latest move. Since Claire wants Haley out of the loft ASAP, she’ll tip Eve off and seal Haley’s fate.

Of course, Eve will milk her inside scoop for all it’s worth! She’ll use this secret to help Jack’s campaign for mayor, so she’ll make a big media splash in the coming episodes. We’ll keep you posted as other Days news emerges. Stay tuned to DOOL and don’t forget to check CDL often for the latest Days of Our Lives spoilers, updates and news.