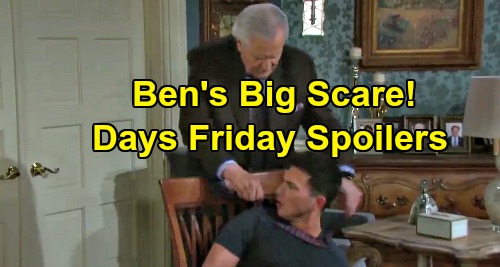 Days of Our Lives (DOOL) spoilers for Friday, September 6, tease that Ciara Brady (Victoria Konefal) will raise an eyebrow over Brady Black’s (Eric Martsolf) offer. He just invited Ciara to join Titan, so she’ll definitely be curious about the position he has in mind. Ciara isn’t exactly qualified to be some high-powered executive, but Brady may have big plans for her to work her way up and learn the ropes.

Of course, this is really part of Victor Kiriakis’ (John Aniston) plan to eliminate Ben Weston (Robert Scott Wilson) from Ciara’s life. He’s eager to get Ciara away from the serial killer and on a better path – at least in his opinion. Ciara sees the progress Ben has made and doesn’t consider him a threat at all. She’s fallen in love and has no intention of turning her back on Ben, so Victor’s taking drastic action.

While Ciara battles suspicions over Brady’s proposal, Xander Cook (Paul Telfer) will deliver Ben to Victor at the Kiriakis mansion. Days spoilers say Victor will taunt Ben before urging Xander to kill him. However, Xander is trying to be the kind of man Sarah Horton (Linsey Godfrey) would want. She wouldn’t approve of Xander murdering Ben in the living room, so he may suggest this is where he bows out.

Days of Our Lives spoilers say Victor won’t let that stop his scheme. He’ll decide to kill Ben himself, but Brady’s interruption will derail things by the time Monday’s new Days episode rolls around, September 9. Until then, Sarah will take a pregnancy test and get confirmation on her bun in the oven. She’ll open up to Kayla Johnson (Mary Beth Evans) about her predicament, so DOOL fans can expect some of Kayla’s solid advice.

Other Days of Our Lives spoilers say Eric Brady (Greg Vaughan) will reconnect with Nicole Walker (Arianne Zucker). They just had a powerful reunion at the farmhouse, but they haven’t had a chance to talk just yet. Nicole and Eric will be able to share their deep feelings on Friday – and little Holly Jonas (Harlow and Scarlett Mallory) will come trotting out to join them soon.

Finally, Kate Roberts (Lauren Koslow) will try to avoid a life-threatening situation. She’ll make Vivian Alamain (Robin Strasser) an offer that’s too good to pass up, but this won’t be the end of Kate’s problems. Vivian’s revenge is still coming. In fact, Kate will end up buried alive in the week ahead!

It sounds like some great scenes are on the way. We’ll give you updates as other Days news comes in. Stay tuned to DOOL and don’t forget to check CDL often for the latest Days of Our Lives spoilers, updates and news.