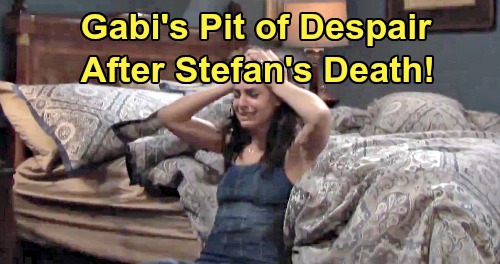 Days of Our Lives (DOOL) spoilers tease that Gabi DiMera (Camila Banus) has some devastation in her future. Based on all the clues surrounding Stefan DiMera’s (Brandon Barash) upcoming exit, it looks like Stefan will be killed off. Gabi will likely have to make the excruciating decision to take Stefan off life support and give his heart to Julie Williams (Susan Seaforth Hayes).

Naturally, that’s going to hurl Gabi into a deep depression. DOOL’s fall promo shows Gabi crumbling as she sinks to the floor, so that should tie in here. That scene may play out when Gabi realizes there’s no hope or perhaps after Gabi loses her love. Days of Our Lives spoilers say Gabi will be a mess as she grieves for the man she had such a deep connection with.

This was a new kind of love for both Gabi and Stefan. There were certainly times when they couldn’t stand each other, but passion was always under the surface. The fact that they overcame their issues says a lot about their adoration for each other. Their love was more powerful than the hatred and schemes that could’ve broken them. That’s why it’s so crushing that death will be what finally tears them apart.

Fortunately, there’s always hope in Salem. People come back from the dead all the time, and Days wouldn’t let a little thing like organ donation stop them! They could argue that someone sneaky swapped a doppelganger in before Stefan’s demise. The real Stefan could be stashed somewhere in a coma if they want to explain this away later.

The show could even take the twin route or have Stefan play a new character who simply looks like Stefan. Regardless, it’d be great to see Banus and Barash’s chemistry continue. They work well together, so it’s a shame to see Gabi and Stefan’s love story come to an end.

However, there’s no word on whether Barash might return down the road. For now, we’ll have to deal with Gabi’s grief. The time jump may save us from the bulk of it, but she’ll still have to suffer. Days of Our Lives spoilers say Gabi will inevitably feel all alone. No one really understands or supports her relationship with Stefan, so it’ll be tough to deal with people who think she’s better off without him.

Nevertheless, that’s what makes “Stabi” and pairings like them so appealing. The best soap couples are the ones that don’t care what anybody else thinks. They feel something special and just go for it! All that matters between them is the love they share.

Days spoilers say Gabi’s period of mourning will be rough, but she’ll pick herself up and move on eventually. DOOL fans are in for some surprises once Gabi and Eli Grant (Lamon Archey) are paired up again. We’ll give you updates as other news comes in. Stay tuned to the NBC soap and don’t forget to check CDL often for the latest Days of Our Lives spoilers, updates and news.