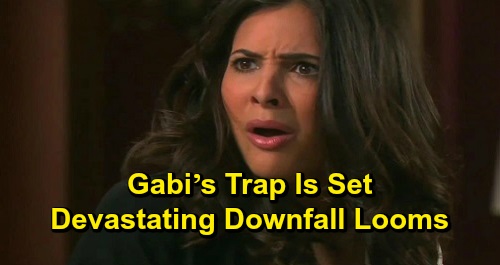 Days of Our Lives (DOOL) spoilers tease that Lani Price (Sal Stowers) and Kristen DiMera (Stacy Haiduk) will be ready to reclaim what they’ve lost. DOOL fans know Kristen had a bit of an epiphany after her brush with death. JJ Deveraux (Casey Moss) showed up with a gun that he pointed straight at Kristen’s head. He came close to pulling the trigger and ending Kristen for good, but she managed to escape a grim fate.

Kristen decided it was a sign that she should return to Salem. She wants to take her rightful place at DiMera Enterprises and get her man back, too. Kristen will need Brady Black’s (Eric Martsolf) cooperation for that, but we all know Brady’s putty in Kristen’s hands. She’s his kryptonite, so there’s no way he’ll be able to put up a fight for long – especially since their baby is likely still alive.

There’s a good chance Mackenzie “Mickey” Horton is actually Kristen and Brady’s daughter, but that’s a story for another day. Mickey will be busy receiving cancer treatment in Boston for a while, so that potential secret will have to come out later. For now, let’s focus on Kristen and Lani’s team effort. Since Kristen convinced Lani not to take her final vows, they’ve ditched the convent and now need a firm plan.

Days of Our Lives spoilers say Lani and Kristen will have to be smart about this. They can’t just go walking back into town without a scheme to get back what’s theirs. Plus, Kristen and Lani have been cooped up doing chores for months. This is their chance to pamper themselves – and they’ll intend on taking advantage of it!

Before they leave Italy behind, Days of Our Lives spoilers say Lani and Kristen will enjoy a special day at the spa together. They’ll be able to relax while they strategize about their next moves back in Salem. Kristen and Lani have a mutual enemy in Gabi Hernandez (Camila Banus). They’ll resolve to blow up her world in a big way, so Gabi had better watch out.

Days spoilers state that Kristen will ultimately kick off the plot by calling Gabi. Will she set some kind of trap during this phone call? Kristen’s a pretty crafty character, so that seems like a great option. This scheme may take some time, but you can bet Gabi’s downfall is looming.

Kristen will hope she can reclaim her own life and help Lani Price (Sal Stowers) reclaim her happiness with Eli Grant (Lamon Archey) as well. It sounds like this alliance will bring some fun twists and turns. We’ll give you updates as other Days news comes in. Stay tuned to DOOL and don’t forget to check CDL often for the latest Days of Our Lives spoilers, updates and news.