Days of Our Lives Spoilers: General Hospital and DOOL Stars To Appear In New Holiday Movie – ‘A Mermaid For Christmas’ 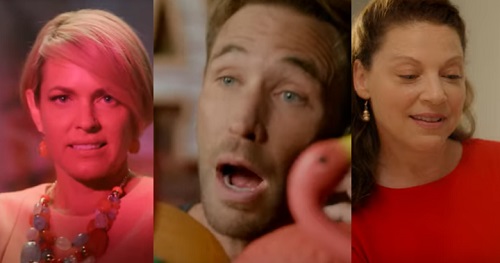 Days of Our Lives (DOOL) spoilers has some news to pass on about an upcoming holiday movie that several DOOL and GH stars will be appearing in. The movie is titled “A Mermaid For Christmas” and is currently scheduled to drop on Tuesday, November 26 on Amazon Prime Video.

The movie starts Kyle Lowder (Rex Brady, DOOL), who is also executive producer along with Michael and Barbara Caruso. In a recent press release, Michael Caruso said that the movie “combines classic Christmas themes with an escapist fantasy element that only a mermaid can provide” and said that the film was “filled with warmth, humor, whimsy, and just a touch of magic.”

Kyle plays the part of Travis in the movie, and although specific details about the movie’s plot haven’t been divulged, the trailer (which you can watch below) offers some clues. But one thing is perfectly clear – Travis will encounter a mermaid names Daphne, who will played by Jessica Morris (Jennifer Rappaport, OLTL).

Kyle Lowder spoke with soaps.com earlier this year about the movie and offered the following details: “She is a mermaid from circumstances that I can’t reveal, but her whole existence is to become a human again. She has to break that curse, but there’s a very specific way she has to do that. My character, Travis, is going through something at the time and the plot centers around them helping each other out. The love story develops through it and it all comes together in a very Christmas miracle way.”

About his character Travis, Kyle said: “This is a guy who is just filled with love for his family and friends. He’s just a guy who wants to do good by everybody and puts himself aside in order to focus on others.”

You can follow the movie’s official Instagram site for up-to-date information about “A Mermaid For Christmas.” Fans have been flooding the site’s posts with enthusiastic comments about the upcoming movie. One fan nicely summed up most of fans’ sentiments when she said: “Sweet – can’t wait to watch my favorite soap actors all in one film together.”

Are you planning to watch “A Mermaid For Christmas?” Stay tuned to DOOL and don’t forget to check CDL often for the latest Days of Our Lives spoilers, updates, and news.