BY hellodrdavis on March 16, 2019 | Comments: one comment
Related : Days of Our Lives, Soap Opera, Spoiler, Television 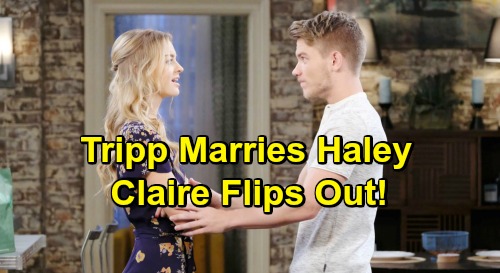 Days of Our Lives (DOOL) spoilers tease that Haley Chen (Thia Megia) is in some serious legal trouble. She’s been arrested for being in the country illegally, plus she’s been questioned in the poisoning of Marlena Evans (Deidre Hall). She’s really jammed up right now, but fortunately it seems that the police are realizing that she’s been set up for Marlena’s poisoning. That gets her out of one jam, but it seems that her immigration problems are only beginning.

Thanks to Jack Deveraux (Matthew Ashford) and Eve Donavon’s (Kassie DePaiva) political maneuverings, Haley is front and center in the news and pressure is being put on the authorities to make her case an example for others. That means that there’s no way the law will look the other way. Haley’s not going to just walk away from this.

Indeed, Days of Our Lives spoilers say that Justin Kiriakis (Wally Kurth) will soon have some terrible news for Haley – she’ll be put on the path to deportation in just a handful of days. That will leave Haley with very little time left and no options…that is, until it dawns on a couple of her male friends that there is a way to keep her in the country. Marriage!

First off, JJ Deveraux (Casey Moss) will float the idea of marriage to Haley. JJ feels terrible about how Jack “outed” Haley’s immigration status on live TV and put her in this predicament in the first place. He’ll think that it’s the least he can do to marry Haley and save her from this whole mess.

But according to Days of Our Lives spoilers, Haley will turn JJ down flat. She’ll still be peeved with JJ for telling Jack about her immigration status to begin with, and she’ll worry that JJ could get in trouble for fraud. Plus, Haley probably won’t want anything to do with being a part of the Deveraux family after what Jack did to her.

But there will be another husband on the horizon for Haley, and that’s Tripp Dalton (Lucas Adams). Sure, Tripp is in a relationship with Claire Brady (Olivia Rose Keegan) right now, but he’s feeling uncertain about their relationship, especially since a part of him suspects her (correctly) of being the person who tipped off Jack and Eve about where Haley was hiding.

Plus, Tripp truly cares about Haley. The two are friends and have had a good connection since they first met. According to Days of Our Lives spoilers, Tripp will learn about JJ’s proposal and Haley’s rejection of it, and he’ll propose that he and Haley get married instead. Haley will protest and initially reject the idea, but she’ll come to see that it’s really the only chance she has to stay in the country.

So, it looks like we’re in for DOOL wedding soon, as Haley and Tripp tie the knot. Imagine how Claire is going to react! It’s probably not going to be pretty when Tripp drops the bombshell on Claire that he’s marrying someone else, even if it’s only in name. Expect Claire to come unglued when she realizes that her own plan to get rid of Haley has completely backfired on her.

It should be interesting to see what happens from here with Tripp, Claire, and Haley. Chances are, Haley will be under quite a bit of scrutiny, with the authorities wanting to make sure that her marriage to Tripp is legitimate, and so she and Tripp may have to play their part of a happily married couple for a while. Haley will have to live at the loft, and Claire will surely be beside herself.

Of course, knowing Claire, she’ll probably enact some plan to try to get rid of Haley some other way. We know that Claire can be dangerous when she’s jealous and someone is standing in her way of something – after all, she’s the one who started the first cabin fire that almost killed Ciara Brady (Victoria Konefal). Haley had better be careful!

Do you think that Claire will pose a danger to Haley once Haley becomes Mrs. Tripp Dalton? Stay tuned to DOOL and don’t forget to check CDL often for the latest Days of Our Lives spoilers, updates, and news.