BY hellodrdavis on May 1, 2019 | Comments: 4 comments
Related : Days of Our Lives, Soap Opera, Spoiler, Television 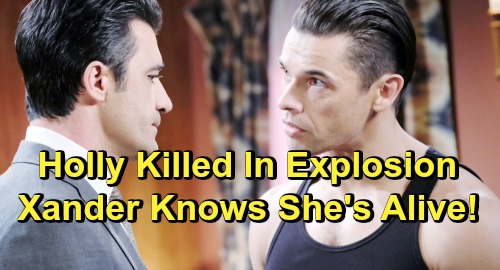 Days of Our Lives (DOOL) spoilers tease that Nicole Walker (Arianne Zucker) will be in for total devastation while her daughter Holly Jonas (Harlow and Scarlet Mallory) is missing. Nicole will be frantic to find Holly, and the Salem PD will be on the case, with Hope Hernandez (Kristian Alfonso) and Rafe Hernandez (Galen Gering) will work tirelessly to find the little girl.

But unfortunately, Ted Laurent (Gilles Marini) will be following the investigation closely. DOOL viewers know that Ted is one of Holly’s captors, along with Xander Cook (Paul Telfer). It seems that Ted will stay on top of the investigation, and that will allow him to stay one step ahead of the police at every turn. It will be truly frustrating for everyone.

But finally, it appears that Hope and Rate will get a lead on Hollly’s whereabouts, and since Ted will be privy to their knowledge, they’ll be at a total disadvantage. Exactly how things transpire remains to be seen, but Days of Our Lives spoilers say that Rafe will disobey a direct order from Hope, which will lead to an accident.

Holly will be riding in a van that goes off the road and over a precipice, perhaps during a police chase that never should have happened. And when Ted and Rafe go down the precipice to determine whether there are any survivors of the accident, the van will suddenly explode, and Holly will be presumed dead in the explosion.

Of course, this will leave Nicole absolutely heartbroken and shattered, but what she won’t know is that Holly did survive the accident, and that Ted and Xander will have possession of her. It’s unclear at this point how Holly survives and how Ted and Xander will get hold of her before the explosion, but the good news is that she’ll survive.

We’ll see just how long it takes for Nicole to discover that Holly is really alive. The story could drag out for a while, but it certainly seems that Xander will have some interactions with Nicole going forward during which he conceals that Holly is alive. And Ted will continue to “romance” Hope, knowing that he deceived the police for his own gain.

How long do you think Nicole will have to endure the pain of believing that her daughter has died? Stay tuned to DOOL and don’t forget to check CDL often for the latest Days of Our Lives spoilers, updates, and news.