BY Heather Hughes on May 1, 2019 | Comments: 2 comments
Related : Days of Our Lives, Soap Opera, Spoiler, Television 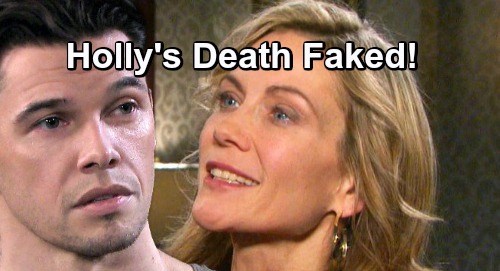 Days of Our Lives (DOOL) spoilers tease that Xander (Paul Telfer) and his secret partner have a bombshell in mind. Their plan could go horribly wrong…or it could go horribly right! DOOL fans know Xander’s working with Ted Laurent (Gilles Marini), but it appears he may be working with Kristen DiMera (Stacy Haiduk), too. They have another step in their plan, which could bring total heartbreak to Salem.

Holly Jonas (Harlow and Scarlett Mallory) was kidnapped, but what now? The drug cartel will end up being blamed for this, so it’s not like Xander and Kristen are seeking a ransom. Xander seems loaded right now anyway, so there has to be a motive beyond money.

Days viewers also know Xander is taking good care of Holly. He has no intention of hurting the kid, which makes sense considering he’s such a lovable villain. That’s Xander’s big selling point, so DOOL doesn’t want to mess with that. Kristen has always wanted kids, so she wouldn’t hurt Holly either. She’s got a soft spot for children, so there are no worries about deliberate harm here.

Of course, you’ve probably heard by now that Holly will likely die or be presumed dead on next week’s new Days episodes, May 6-May 10. Days of Our Lives spoilers pretty much guarantee it, but that doesn’t mean the death will stick. DOOL characters come back from the dead all the time, so we expect the same from Holly – particularly because Nicole Walker (Arianne Zucker) fought so hard to be a mom.

Days surely wouldn’t be so cruel as to take away Nicole’s beloved daughter forever, so there has to be a twist coming. However, they may not reveal this twist to fans right away. It would kind of lose the emotional impact if they did. They may hint at it, but it’d be wise to wait on confirming it until after the first round of grief and lashing out.

As far as Salem is concerned, Holly should be dead and gone. Jack Deveraux (Matthew Ashford) was dead until he wasn’t. The same goes for Will Horton (Chandler Massey), who died right in front of us at Ben Weston’s (Robert Scott Wilson) brutal hands. If Days can explain away that death – which they did with ease – they can explain away any death at all.

That’s especially true with presumed deaths, which might be the case for Holly. Like mother, like daughter! Nicole just came back from a presumed demise, so Holly could be next. Days of Our Lives spoilers say Rafe Hernandez (Galen Gering) will make a tragic error that costs Nicole dearly. There’ll be a shocking discovery at the site of a terrible accident.

It’s easy to imagine a piece of Holly’s pajamas being found by a cliff or perhaps a stray slipper in a river. Even if there’s a body, that really doesn’t mean anything in Salem. Regardless, this could all be part of Xander and Kristen’s scheme. Will they fake Holly’ death as part of whatever they’re up to?