Days of Our Lives Spoilers: Holly’s in Chicago Based On New Lead – Eric, Jack and Jennifer Desperate Reunion Mission 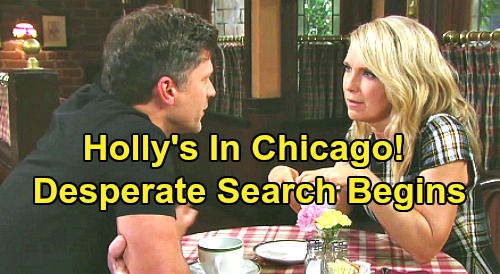 Days of Our Lives (DOOL) spoilers tease that the hunt for Holly Jonas (Harlow and Scarlett Mallory) will soon get underway. After Kristen DiMera’s (Stacy Haiduk) plan falls apart, she’ll be unmasked at John Black (Drake Hogestyn) and Marlena Evans’ (Deidre Hall) anniversary bash. That’ll lead to Kristen’s arrest along with her attempt to cut a deal.

Xander Cook (Paul Telfer) will also confirm that Holly is alive, but he may not have answers on her exact location now. It’s possible Kristen will have her minions move Holly to be sure her deal works out.

Days spoilers say Eric Brady (Greg Vaughan) will be desperate to get that little girl back. He’ll go to Jennifer Horton (Melissa Reeves) and discuss the drama before they take their plea to the mayor.

Jack Deveraux (Matthew Ashford) will be faced with a major decision thanks to Kristen’s leverage. She may be the only one who can reunite Holly with her family – and Kristen certainly won’t talk without her freedom. Although Eric will be furious with Kristen, he’d rather have Holly’s safe return than justice.

Days of Our Lives spoilers say Eric and Jennifer will push Jack to accept the terms. They’ll think Jack has to make this deal or else Holly may never come home. DOOL fans can expect Jack to mull it over carefully.

Kristen is an incredibly dangerous woman, so Jack will have concerns about putting her back out into the world. She could target her enemies all over again and bring deadly destruction.

All Three Will Head To Chicago With One Goal In Mind

Later, Jack and Jennifer will team up on a mission with Eric. Days of Our Lives spoilers say they’ll all head to Chicago with a goal in mind. It sounds like they’ll get a lead and determine that’s where Holly is. Of course, there’s no word yet on whether this info will come from Kristen. There’s a chance Xander may know enough to put them on the right track.

Regardless, it’s nice to see Days spoilers about Holly’s comeback. She’s a sweet kid who deserves to be around the people who love her. Let’s hope Eric, Jennifer and Jack find Holly ASAP!

We’ll give you updates as other news comes in. Stay tuned to DOOL and don’t forget to check CDL often for the latest Days of Our Lives spoilers, updates and news.