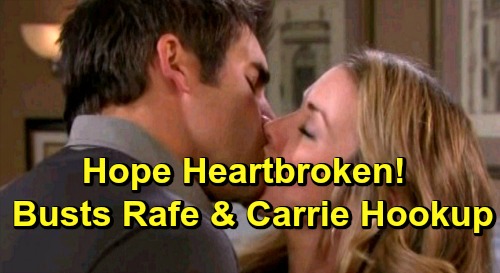 Days of Our Lives (DOOL) spoilers tease that two characters will come together during a rough patch. DOOL fans know Rafe Hernandez (Galen Gering) recently faced the end of his marriage. He’d been struggling with Hope Brady (Kristian Alfonso) for a while, but they just couldn’t make it work. Now Rafe’s got a baby to take care of and has to be feeling pretty stressed.

Meanwhile, we’ve got distraught Carrie Brady (Christie Clark). During the week of July 1-5, Days of Our Lives spoilers say Carrie will make a painful admission. She’ll start by filling in Roman Brady (Josh Taylor), but it’ll be Rafe’s turn later. Carrie split from Austin Reed (Austin Peck) offscreen, so she’s been trying to heal herself and move on.

Rafe will make that incredibly easy when their chemistry reignites. A kiss at the pub will lead to deeper bonding and a night of steaminess. Days of Our Lives spoilers state that Rafe and Carrie will make love without any regrets. However, there’ll definitely be some guilt the next morning.

That’s because Hope will catch Rafe coming out of Carrie’s room. It won’t take her long to assume they had sex. Hope will understand that Rafe’s single and can do what he wants. On the other hand, it’ll undoubtedly sting that Rafe always moves on so quickly.

Hope’s been hesitant to dive right in with Ted Laurent (Gilles Marini), and part of that’s just needing a chance to heal. Rafe slept with Sami Brady (Alison Sweeney) mere hours after another “Rope” breakup, so at least he waited a bit longer this time! Even so, Hope will have to process her complicated feelings.

Just in case there was any doubt in Hope’s mind, Carrie will inadvertently confirm their hookup. Days of Our Lives spoilers say Hope will overhear Carrie talking to someone about it. Once Carrie realizes Hope’s in the loop, she’ll hate that she just broke her heart. Carrie cares about Hope as part of the forever Brady family, so she’ll beat herself up over the betrayal.

Naturally, a lot of Carrie and Austin fans out there aren’t thrilled about this story. They were a popular Days couple, so it’s a shame to see the show throw them away for no reason. Carrie isn’t sticking around, so this won’t provide any long-term drama. There just aren’t enough benefits to destroy Carrie’s relationship for this hookup.

Nevertheless, that’s the direction DOOL’s going in, so we’ll roll with it! On the bright side, we’ll get more Carrie airtime before she heads out. Days spoilers say some shockers and shakeups are brewing, so stay tuned. We’ll give you updates as other news comes in. Stick with the NBC soap and don’t forget to check CDL often for the latest Days of Our Lives spoilers, updates and news.