Days of Our Lives Spoilers: Hope Stressed & Not Herself – Is Princess Gina Returning?

BY hellodrdavis on September 18, 2019 | Comments: one comment
Related : Days of Our Lives, Soap Opera, Spoiler, Television 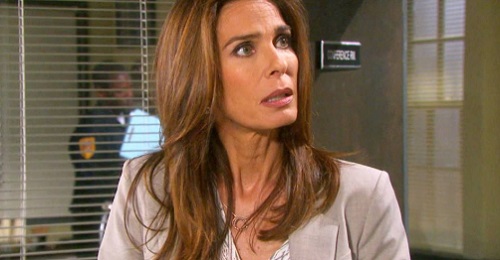 Days of Our Lives (DOOL) spoilers tease that Hope Brady (Kristian Alfonso) will have some dark days ahead. As DOOL viewers know, she’s had a tough year. She suffered a painful divorce from Rafe Hernandez (Galen Gering) after dealing with some serious issues in their marriage. Then, she embarked on a new relationship with Ted Laurent (Gilles Marini), who was tragically shot and killed shortly thereafter. Hope was distraught not only by his death, but by his lies and deception – something that the two weren’t able to resolve before his death.

Plus, Hope lost her career as a police officer. Hope really identified with her occupation as a cop, and she was Salem’s police commissioner for many years. But as DOOL viewers know, she suddenly lost her gig as commish when Jack Deveraux (Matthew Ashford) summarily fired her after the debacle with Holly Jonas’ (Harlow and Scarlett Mallory) supposed death on Hope’s watch.

And now, Hope is dealing with a serious family tragedy. Julie Williams (Susan Seaforth Hayes) has suffered a massive heart attack and she needs a new heart. But unfortunately, her age and health situation make her a poor candidate for a heart transplant, and that’s got Hope, Doug Williams (Bill Hayes), and the rest of the family completely distraught. Fortunately, it looks like Julie will eventually pull through and get a new heart, but it’s going to look pretty grave for a while.

Well, according to Days of Our Lives spoilers, all of this cumulative stress is going to have a big impact on Hope. It seems that she’ll look around and realize that she’s all alone, as Rafe seems to have moved on and is living with his old flame Jordan Ridgeway (Chrishell Hartley) and raising baby David Ridgeway with her. Her daughter Ciara Brady (Victoria Konefal) will be on her own and paired with Ben Weston (Robert Scott Wilson), and Hope may feel like she’s adrift and without purpose.

According to DOOL spoilers, Hope will really be feeling the stress as the days go by. In fact, it seems that she’ll be so distraught that others will notice. Marlena Evans (Deidre Hall) and John Black (Drake Hogestyn) will soon suspect that something is off with their good friend, as they watch her listlessly go through the motions of life. She’ll seem deeply stressed and sad, and they’ll wonder how they can help her.

Of course, we can’t help but wonder about where Hope’s stress and apparent mid-life crisis will lead her. The recent DOOL fall promo clearly showed Hope dressed up as “Princess Gina,” which has been Hope’s alter-ego in the past. Could we be looking at a situation where Hope’s so psychologically distraught that she once again thinks she’s Princess Gina?

Time will tell, but the DOOL fall promo clearly suggests that there’s some Princess Gina drama coming. Hope really is at a crossroads now, and hopefully she’ll lean on Marlena and John and the rest of her family to get through her tough time. Surely, Marlena will be able to see he signs if Hope is once again going the Princess Gina routed…unless her emergence only comes out in private, which could very well happen.

What do you think? Will we see an emergence of Princess Gina? Stay tuned to DOOL and don’t forget to check CDL often for the latest Days of Our Lives spoilers, updates, and news.