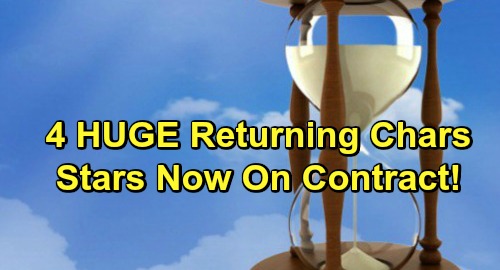 Days of Our Lives (DOOL) spoilers tease that Paul Telfer will be making a big comeback. He’s already set to appear in some upcoming episodes as part of Nicole Walker’s (Arianne Zucker) return storyline, but a longer stint is in his future. A leaked casting photo chart indicates that Telfer is now on contract – and he’s not the only one.

Zucker is also on contract, which is likely great news for “Ericole” fans. If Nicole was just going to be in town for a brief arc, things would look grim for Nicole and Eric Brady (Greg Vaughan). The fact that Nicole’s going to spend some solid time in Salem bodes well for the pairing. That means Eric will likely reunite with the love of his life and help her raise Holly Jonas (Harlow and Scarlett Mallory).

Sarah Horton (Linsey Godfrey) may be out of luck when it comes to Eric, but there’s always Xander! Regardless, Nicole and Xander are going to be key players in Salem. The same goes for Kristen DiMera (Stacy Haiduk) and possibly Susan Banks (Stacy Haiduk). Haiduk has also gone on contract, so it sounds like Kristen will be around long enough to stir up more trouble than usual.

Days of Our Lives spoilers say Kristen’s enemies had better watch out. It might be fun if Kristen could tone down her crazy side just a bit and run DiMera Enterprises. Watching Kristen take on her brother, Stefan DiMera (Brandon Barash), would be awfully fun. We have no doubt that Kristen would put Stefan in his place.

Stefan’s mother will get a great return storyline, too. Robin Strasser will serve as a Vivian Alamain recast down the road, so Days fans can look forward to that. Stasser’s name made the contract chart, which indicates she signed on for something substantial. Vivian is believed to be dead in Salem, but DOOL viewers know she was given Dr. Wilhelm Rolf’s (William Utay) serum and will return for more mischief.

Days of Our Lives spoilers say this contract bonanza is fantastic to hear. The longer we can keep fan favorites and intriguing characters around, the better the drama will be. DOOL doesn’t provide official confirmation on contracts this early, but Jason47 assures fans these four contracts are a safe bet.

The future is bright for the NBC soap! We’ll give you updates as other Days details emerge. Stay tuned to DOOL and don’t forget to check CDL often for the latest Days of Our Lives spoilers, updates and news.