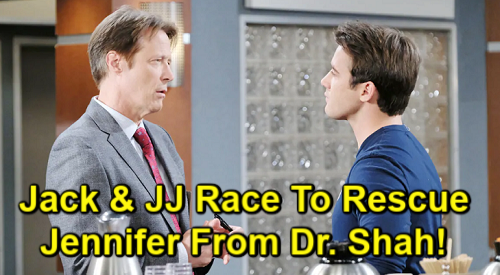 Days of Our Lives (DOOL) spoilers tease that Jack Deveraux (Matthew Ashford) and JJ Deveraux (Casey Moss) will make a disturbing discovery. They won’t be able to get in touch with Jennifer Horton (Melissa Reeves), so it won’t take long for them to grow concerned. Jenn has the kind of job where you need to be available, and she’d always pick up the phone for her family anyway.

JJ and Jack will hold out hope for a while longer, but they’ll eventually have to face the facts. They’ll determine that Jennifer has gone missing, which will be even more troubling due to the destruction of Dr. Wilhelm Rolf’s (William Utay) hospital lab. Jack will suspect the incidents might be connected, and he’ll be exactly right.

However, Jack won’t know who could be behind this after Eve Deveraux’s (Kassie DePaiva) vehement denial. He’ll ultimately talk to Kayla Johnson (Mary Beth Evans) and learn an important piece of the puzzle.

Kayla Johnson Will Admit She Had To Fire Dr. Henry Shah

DOOL fans know Dr. Henry Shah (Piter Marek) as Jennifer’s kind and repeatedly rejected suitor. The caring doc will take a crazy turn in the coming episodes, so Kayla will have some news to pass along.

Days of Our Lives spoilers say Kayla will admit she had to fire Dr. Shah. She’ll explain that they had a disagreement, which led to him becoming a bit violent with her. Kayla obviously couldn’t stand for that, so she’ll reveal that she cut Dr. Shah loose. Jack will determine that Dr. Shah may have come unhinged and kidnapped Jennifer. The problem is, Jack will have no idea where Dr. Shah might have taken her.

In a hotel room, Jennifer will be tied to a chair as she faces her captor. Days of Our Lives spoilers say Dr. Shah will insist Jennifer pushed him too far. He’s sick of Jenn playing games with his heart, and it drove him to his breaking point. Dr. Shah will decide if he can’t have Jennifer, then no one can.

Jennifer may try to reason with Dr. Shah at first, but she’ll quickly realize it’s no use. Dr. Shah’s mind will be made up. Jennifer will even end up spitting in his face after he gives her some water. She’ll be outraged over her time in captivity and she won’t think she has much to lose. Jennifer will expect to die since Dr. Shah will seem so focused on vengeance.

Fortunately, Jennifer’s luck will turn around after Dr. Shah leaves the room. She’ll manage to free one hand and use it to send Jack a dire text. Days spoilers say Jack will soon have Jennifer’s location, so he’ll race to the hotel and search for the right room ASAP.

It sounds like some exciting scenes are coming up. We’ll give you updates as other Days details emerge. Stay tuned to DOOL and don’t forget to check CDL often for the latest Days of Our Lives spoilers, updates and news.