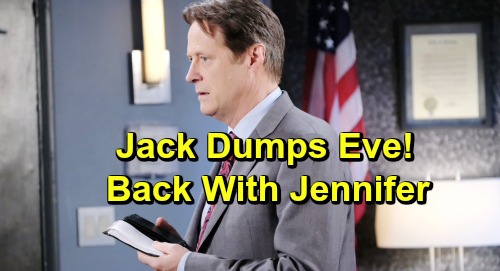 Days of Our Lives (DOOL) spoilers tease that Eve Deveraux’s (Kassie DePaiva) happiness will start to crumble. She’s been manipulating Jack Deveraux (Matthew Ashford) for months, which has worked out pretty well for her. Eve managed to make Jack the mayor of Salem and scored the position of police commissioner for herself. She’s on a terrible power trip, so it’s clear that she must be stopped.

Fortunately, Eve’s day of reckoning is looming. She can’t escape the downfall that will come with Jack’s memory flood. Of course, the trouble will begin long before that. Days of Our Lives spoilers say Eve will discover something Jack’s hiding on July 2. It looks like she’ll find out that Jack’s trying to spark a memory return behind her back.

Eve’s naturally concerned she’ll lose the cushy life she’s built with Jack. Part of her seems to love him on some level, but she mainly loves the way she can control him. Jack is Eve’s puppet, so she won’t be pleased to learn she’s no longer pulling the strings. DOOL spoilers state that Eve will confront her hubby and wonder what he thinks he’s doing.

Will Horton (Chandler Massey) suffered a brain tumor thanks to Dr. Wilhelm Rolf’s (William Utay) memory serum. Rex Brady (Kyle Lowder) and Sarah Horton (Linsey Godfrey) developed an antidote, but who’s to say that antidote won’t have side effects, too? That’s the argument Eve made and will likely remind Jack of next week. She may also point out that Jack said he was happy just the way things were.

However, Jack may admit he’s no longer as sure about that. A growing sense of satisfaction will build within him. Days of Our Lives spoilers say Jack will ultimately decide to go for it. He’ll tell Jennifer Horton (Melissa Reeves) he’s doing to take the serum and see what happens.

Eve isn’t going to like this at all. She’ll fear that once Jack’s memories return, he’ll remember all the horrible stuff she’s explained away and sugarcoated. Eve will also worry that Jack will recall his great love for Jennifer. She’ll know she can’t compete with their rich and lengthy love story, so nothing good can come from Jack’s mission – at least from Eve’s perspective.

Since Eve is a corrupt police commissioner anyway, Jack may kick her to the curb. Eve stands to lose everything – her husband, her job and her dignity. She may have nothing left by the end of all this. Eve deserves her downfall to be honest, so many Days fans will simply pass the popcorn!

It sounds like some exciting episodes are coming up. We’ll give you updates as other Days news emerges. Stay tuned to DOOL and don’t forget to check CDL often for the latest Days of Our Lives spoilers, updates and news.