Days of Our Lives Spoilers: Jack Risks Brain Tumor to Get Memories Back – Risk All for Love 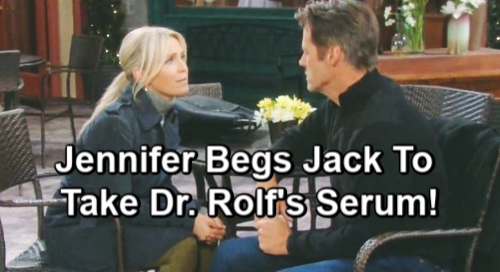 Days of Our Lives (DOOL) spoilers tease that Jack Deveraux (Matthew Ashford) will get some shocking news. During the week of June 24-28, Jennifer Horton (Melissa Reeves) will share something incredible. She’ll reveal that Dr. Wilhelm Rolf’s (William Utay) diary has been found, which means another batch of the memory serum could be whipped up.

Jennifer will think Jack should go for it and see if he can get his memories back. Of course, Jack may point out that the serum had adverse effects for Will Horton (Chandler Massey). DOOL fans can expect Will to survive thanks to the antidote Rex Brady (Kyle Lowder) and Sarah Horton (Linsey Godfrey) provide, but this was an awfully close call.

Eve Deveraux (Kassie DePaiva) admitted she didn’t want the diary in Jack’s hands, but she blamed that on love. She doesn’t want Jack to die of a brain tumor, but Days viewers know there’s far more to the story. It’s clear that Eve’s been manipulating Jack from the start, so she doesn’t want him to catch on.

The Surgery Risks Are Minimal

Nevertheless, Days of Our Lives spoilers say none of that will matter to Jennifer. When Jack complains about potentially getting a brain tumor from the serum, Jenn will likely remind him that they have the cure. She won’t see why Jack shouldn’t go after his memories since the risks are minimal.

Days of Our Lives spoilers state that Jack will still have concerns. Most of those concerns will involve what he might remember. Part of Jack likes this ruthless version of himself, but another part of him is longing for a former life. He’ll be torn about how to proceed since a memory flood would change everything.

Even so, Jack will ultimately decide this is something he has to do. He won’t want to keep waltzing along in the dark on his past. Jack will thrill Jennifer when he vows to give the serum a try, but you can bet Eve will fight this every step of the way.

Eve Deveraux Will Get Dumped

She’ll realize she could lose Jack forever if Jack recalls all the horrible parts of their history and finally sees that everyone else was right about her.

It sounds like Jack’s decision could affect a plenty of people. There’s no guarantee Dr. Rolf’s serum will work, but he’ll give this his best shot. Thankfully, DOOL watchers know Jack’s memory recovery is inevitable. A reunion between Jack and Jennifer will be the reward at the end of this storyline.

That means Eve will be dumped and alone before you know it! We’ll give you updates as other Days details emerge. Stay tuned to DOOL and don’t forget to check CDL often for the latest Days of Our Lives spoilers, updates and news.