Days of Our Lives Spoilers: JJ Attacks Jack – Beats Up Dad Before Going On The Run With Haley

BY hellodrdavis on May 12, 2019 | Comments: Leave Comments
Related : Days of Our Lives, Soap Opera, Spoiler, Television 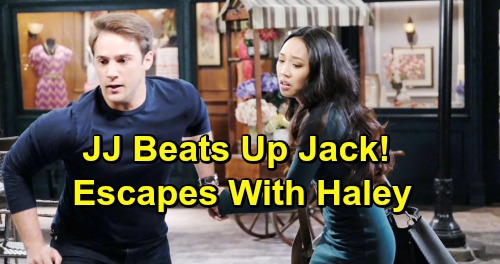 Days of Our Lives (DOOL) spoilers tease that JJ Deveraux (Casey Moss) will be feeling desperate. He watched helplessly as Haley Chen (Thia Megia) was forced by Eve Deveraux (Kassie DePaiva) to publicly admit that she seduced Tripp Dalton (Lucas Adams) so she could marry him and stay in the country. Of course, that wasn’t true, but Haley had to downplay Tripp’s involvement in their fraudulent marriage to save him from prosecution.

Of course, Eve may have done the dirty work and coerced Haley to come clean about her sham marriage, but Jack Deveraux (Matthew Ashford) stood behind the whole thing. It was all just a ploy to get Jack elected at the last minute, and it looks like it will work, as DOOL spoilers say that Jack will indeed be elected mayor of Salem.

Jack may ultimately be happy with how he got his win, but his son certainly won’t be. According to Days of Our Lives spoilers, JJ will be so enraged with his father for this stunt that he’ll physically attack him. JJ will totally punch Jack out as all of Salem watches!

And that will only be the beginning of the drama. ICE will be after Haley and ultimately they’ll apprehend her and start proceedings to deport her back to China. But according to Days of Our Lives spoilers, JJ will have a plan. He’ll manage to bust Haley out of holding, and the two of them will become fugitives from the law.

This will certainly pose an interesting situation for Jack, whose son and Haley will be on the run from the authorities, with Jack and Eve probably leading the charge for them to be caught and punished. Of course, the other wrinkle in this story is that as all this other drama is going on, Melinda Trask (Laura Kai Chen) will just have spilled the truth that she’s Haley’s mother, not her sister.

Unfortunately, that truth won’t seem to matter much to Jack and Eve, or to ICE, who will still be chasing after Haley and JJ despite Melinda’s admission. Haley’s case will remain open, and she’ll have to remain on the lam or else risk deportation. How do you think Haley’s situation will ultimately get resolved? Stay tuned to DOOL and don’t forget to check CDL often for the latest Days of Our Lives spoilers, updates, and news.