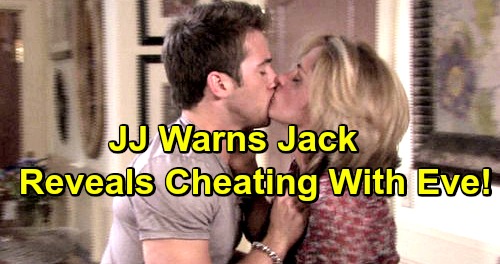 Days of Our Lives (DOOL) spoilers tease that Jack Deveraux (Matthew Ashford) will continue getting played by Eve Donovan (Kassie DePaiva). Eve is hell-bent on ruining Jennifer Horton’s (Melissa Reeves) life at all costs, and she’s using an amnesiac Jack to do it. She’s filling Jack’s head with a warped version of his past in which Jennifer is the villain.

In the coming days, Eve will have a lot of plans for Jack. She’s determined to marry Jack somehow, as she knows this will cause maximum pain to Jennifer. And Days spoilers say that she’s going to urge Jack to make a bold career move, which will likely be something that will upset Jennifer as well. Eve’s got her claws in Jack, and she thinks that she can control him completely.

But Eve wasn’t counting on Jack’s children backing up Jen in her fight to get Jack back. It seems that JJ Deveraux (Casey Moss) in particular will be instrumental in working against Eve’s brainwashing of Jack.

According to days spoilers, JJ will spend some time with Jack in the coming days. Jack will ultimately feel like JJ is the one family member that he has any sort of bond with, and JJ will use that to his advantage. While Eve is telling Jack lies in one ear, JJ will be setting the record straight in the other.

Perhaps JJ will recount his own sordid history with Eve for his dad. Jack would probably be very interested to know that JJ and Eve were once an item, and that they actually slept together. JJ may be able to fill in some details to demonstrate for his dad that Eve isn’t being entirely forthcoming with him.

Whether Jack will ultimately listen to JJ and grow skeptical of Eve remains to be seen. Jack seems pretty vulnerable right now to Eve’s advances. But if anyone can get through to Jack, JJ can.

Do you think that JJ can save Jack from Eve before Eve convinces Jack to do something rash, like marrying her? Stay tuned to DOOL and don’t forget to check CDL often for the latest Days of Our Lives spoilers, updates, and news.