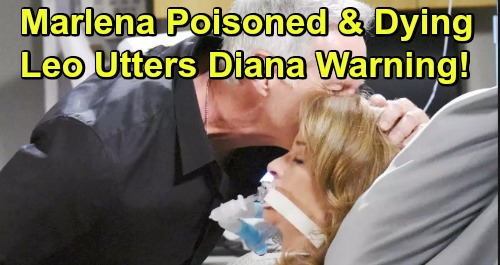 Days of Our Lives (DOOL) spoilers tease that John Black (Drake Hogestyn) will break some big news to Leo Starke (Greg Rikaart). He’ll inform him that they’re father and son, so Leo should be taken aback. Of course, Leo may doubt his mother’s claims. Diana Cooper (Judith Chapman) can’t be trusted, which Leo knows better than anyone. He can’t be trusted either, but he’s learned from the best!

It looks like a DNA test will back John up, but we’re betting the results will be rigged or a mistake. Leo isn’t sticking around indefinitely, so there’s no point in giving Leo and John permanent ties. Nevertheless, John will deliver updates while Diana carries out a new sinister scheme. Days of Our Lives spoilers say Diana will poison Dr. Marlena Evans (Deidre Hall) and leave her unconscious body to be found by John.

After John wraps up his chat with Leo, he’ll stumble across Marlena just like Diana predicted. DOOL fans can expect John to leap into action. He’ll make sure Marlena gets to the hospital immediately, but he’ll remain quite concerned. It hasn’t been that long since Marlena suffered a gunshot wound and nearly died. John will be at the end of his rope as he faces the possibility of losing “Doc” once again.

Diana will love the chance to play dumb about the poisoning and console her former flame. She’ll provide comfort and assure John that he can get through this – even if Marlena doesn’t make it. Days spoilers state that a nurse will blame Kristen DiMera (Stacy Haiduk) for the attempt on Marlena’s life, which shouldn’t seem unreasonable to John. He might fear Kristen’s still out for revenge.

Diana may be the one driving that lie, but Leo won’t let her. As soon as he finds out Marlena was poisoned, he’ll think this has Diana written all over it. Days of Our Lives spoilers say Leo will reach out to John and insist that he smells a rat. He’ll warn his new pop about trusting Diana, but John may be way ahead of him.

Soon after, Marlena will face a terrifying setback at the hospital. Will Diana be to blame for that as well? Will she sneak in Marlena’s room and do something to derail her recovery? We’ll keep you posted as other Days details emerge. Stay tuned to DOOL and don’t forget to check CDL often for the latest Days of Our Lives spoilers, updates and news.