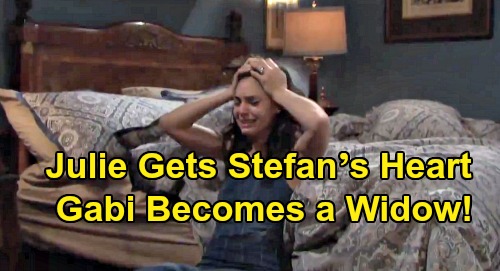 Days of Our Lives (DOOL) spoilers reveal that devastation is headed Gabi DiMera’s (Camila Banus) way. A crushing blow’s already in motion now that Julie Williams (Susan Seaforth Hayes) has suffered a heart attack. Gabi left Julie to die, but she didn’t really mean to. She assumed Julie was faking it – although doubts seemingly started to creep in later.

Julie will rat Gabi out after she awakens, which will certainly bring some harsh attacks on Gabi. Lani Price (Sal Stowers) and Eli Grant (Lamon Archey) won’t appreciate Gabi’s actions one bit! However, Gabi may have a chance to redeem herself with a difficult decision. Let’s look at what we know so far.

Days of Our Lives spoilers state that Julie’s prognosis will be grim, so Kayla Johnson (Mary Beth Evans) will deliver horrible news. It turns out Julie will need a new heart, but she’s too old for the transplant list. Unless someone chooses to donate the heart of a dying loved one, Julie won’t survive.

Of course, we know Julie isn’t going anywhere. Days isn’t killing her off, so how will Julie get a heart? We have to keep putting the puzzle pieces together. DOOL fans can expect Vivian Alamain (Robin Strasser) to seek revenge on Kate Roberts (Lauren Koslow). Kate will get shot, which will lead to Eli grilling Gabi and Stefan DiMera (Brandon Barash) about what they know.

However, DOOL’s fall promo also shows Lani lurking in the dark with a gun. She’s behind a hooded Vivian and the whole scene seems pretty ominous. Days of Our Lives spoilers say an on-duty incident is coming up, which could make some serious waves. This may happen as part of Vivian’s next round of chaos.

That brings us to another clue. Stefan will get dragged into Vivian’s revenge plot, so Gabi will ultimately have to make a terrible choice. The fall promo shows Gabi looking deeply distraught as she sinks to the floor. Gabi’s as shady as they come, so she’s not breaking up with Stefan over some vengeance scheme gone wrong – no matter the consequences. There has to be more to the story.

It definitely seems like Gabi’s reacting to a deadly outcome here. Her emotions are too intense for a simple split. What does all this mean? When you add up the clues, it sounds like Stefan will be injured by mistake. Whether that’s Lani’s blunder or someone else’s, Stefan may find himself dying in the hospital – where Julie, Gabi’s worst enemy, is in desperate need of a new heart.

The soapy story is pretty clear to us. Gabi’s terrible choice will likely be accepting there’s no hope for Stefan and deciding to donate his heart to Julie. She can do that as Stefan’s wife. It’s worth mentioning that Kayla says there’s no sign of neurological activity in the fall preview. That could be about Kate, but Stefan is also an option based on all these hints.

Days of Our Lives spoilers say Stefan’s set to exit soon, so this may be how he does it. Naturally, they could still bring Stefan back down the road. It’d be easy to claim Stefan was swapped with a doppelganger at the last second or something along those lines. DOOL bends all kinds of rules to bring characters back from the dead. There’s always hope!

Do you think Julie will get Stefan’s heart? Will Gabi become a devastated widow? We’ll give you updates as other Days news comes in. Stay tuned to DOOL and don’t forget to check CDL often for the latest Days of Our Lives spoilers, updates and news.