BY hellodrdavis on November 8, 2019 | Comments: one comment
Related : Days of Our Lives, Soap Opera, Spoiler, Television 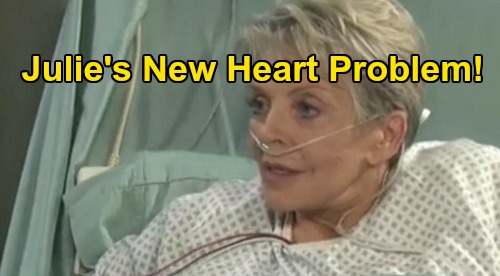 Well, Lani did what Gabi wanted, and she broke Eli’s heart at the altar. But will this mean that Gabi is done with manipulating Lani for good? She certainly accomplished her goal, which was to cause Lani maximum pain and make her lose her relationship with Eli. But what will happen going forward, given that Gabi still has control of Julie’s pacemaker?

Well, one possibility is that Julie will go on with life and Gabi will leave her heart alone. One would like to think that this is what Gabi will decide to do, but who knows – she may have more bidding that she wants Lani to do. Of course, we can’t forget that we’ve got the big DOOL time jump coming up on Friday, November 8th, so at some point thereafter, viewers will find out what ultimately happened to Lani after she broke Eli’s heart, and what happened to Julie.

Days of Our Lives spoilers for after the time jump indicate that Julie will have some difficulties with her heart. Specifically, her heart will suddenly start racing for no apparent reason, and this will probably strike fear in her and her family that something could be wrong with her donor heart. Of course, DOOL viewers know that while a racing heart could signify a problem with the heart itself, it could also mean that there’s an issue with the pacemaker that Gabi controlled before the time jump.

One wonders whether this means that Gabi will still have control of Julie’s pacemaker after the time jump. If so, then it could mean that Gabi has held Julie’s safety over Lani’s head for a long time. Of course, it seems strange that Lani would have allowed Gabi to threaten her for the duration of a year, but then again, it’s surprising in its own right that Lani would have ever gotten trapped by Gabi’s plot to begin with.

At any rate, it seems that Julie may have a health crisis after the time jump. But will her racing heart be caused by Gabi? It’s unclear at this point whether Julie and Gabi will be on good terms after the time jump. They were certainly bitter enemies in the past, but since Gabi decided to give Stefan DiMera’s (Brandon Barash) heart to Julie, Julie has softened toward Gabi. We’ll see if what a year will bring in their relationship.

Do you think Gabi will still be in control of Julie’s pacemaker after the time jump? Stay tuned to DOOL and don’t forget to check CDL often for the latest Days of Our Lives spoilers, updates, and news.