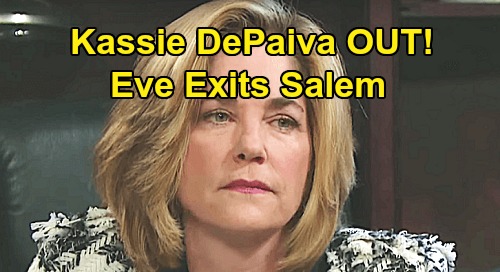 Days of Our Lives (DOOL) spoilers reveal that another NBC soap star is out according to a new photo chart. This chart reveals Kassie DePaiva (Eve Donovan) is no longer with the show. Jason47 shared the news on his Facebook page, and fans might have some mixed feelings about losing Eve.

There’s no denying that Eve’s been a monster lately. She’s brought some good drama, but she’s become insufferable to many viewers. Eve’s relationship with Jack Deveraux (Matthew Ashford) was awful all around. She’s been targeting plenty of innocent Salemites, so a lot of people were probably rooting for Eve to check out.

Pairings With Brady Black And Jack Deveraux Were Flops

She has every right to hate Ben until the end of time for killing her young daughter. The show just didn’t quite handle it in a way that made Eve sympathetic.

Eve’s love stories have left a bit to be desired as well. Her pairing with Brady Black (Eric Martsolf) wasn’t exactly sizzling and this one with Jack was a total flop. It’s easy to see that DePaiva and Ashford had a blast working together, but Eve and Jack just didn’t work as a romantic offering. Part of that was due to Eve’s constant manipulation – including destroying the memory serum vials and formula to make more.

Some Days of Our Lives fans could probably get behind Eve in other stories and different pairings. At the same time, there may not be too many broken hearts over this exit.

No Word Yet On How Eve Donovan Will Depart Salem

Eve’s latest stint trashed the character, so Days may have decided to rest her for a while and possibly bring her back later. There’s also the budget to consider, so they had to decide who could give them the most bang for their buck.

Whatever the case, Days of Our Lives spoilers say Eve’s exit is looming. There’s no word yet on how Eve will depart Salem, but more details should emerge eventually. Will you miss Eve?