Days of Our Lives Spoilers: Kate In Critical Condition After Being Shot – Vivian Comes To Hospital To Finish Her Off

BY hellodrdavis on September 8, 2019 | Comments: one comment
Related : Days of Our Lives, Soap Opera, Spoiler, Television 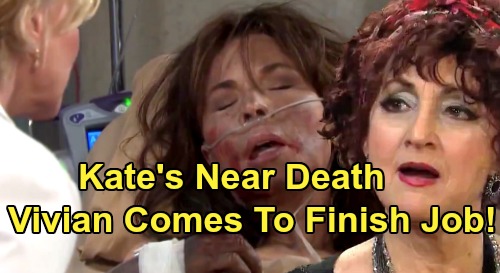 Days of Our Lives (DOOL) spoilers tease that Vivian Alamain (Robin Strasser) will be feeling panicked. As DOOL viewers know, she had a major score to settle with Kate DiMera (Lauren Koslow) when she came back from the dead. Vivian tends to hold serious grudges, and she’s been holding on to a grudge against Kate ever since Kate “killed” her in cold blood last year. Of course, Kate has claimed that the shooting was in self-defense, but DOOL viewers know that the shooting was deliberate.

Well, Vivian plotted some serious revenge against Kate, and she ended up surprising Kate in the park, then holding her at gunpoint. She ended up taking Kate to the cemetery and nudging her up near an open grave, then shooting her and burying her in the dirt. But although things look bad for Kate, DOOL spoilers say that Kate will survive the shooting and manage to dig her way out of the dirt.

From there, Kate will make her way to University Hospital, where she’ll make it inside before collapsing. She’ll be near death, but Kayla Johnson (Mary Beth Evans) and Haley Chen (Thia Megia) will spring into action to save her life. She’ll be in critical condition, and going forward things won’t look good for her. In fact, things will look so grave that Lucas Horton (Brian Dattilo) will be called home to say his goodbyes, in the event Kate doesn’t make it.

Of course, for Vivian, the fact that Kate survived will be horrifying, since if she survives, she’ll certainly turn Vivian in for her crime. That will leave Vivian scrambling and worried about what to do about Kate. She won’t want Kate to survive and spill the beans about what she did, so she’ll scheme to get rid of Kate, but it won’t be easy since Kate will be in the hospital and constantly surrounded by people.

According to DOOL spoilers, Vivian will confide in Stefan DiMera (Brandon Barash) about her Kate problem, and she’ll want him to help her make sure that Kate doesn’t survive to tell the tale about what she did. But it looks like Stefan will refuse to get involved, or else Vivian will decide to go rogue for other reasons, since DOOL spoilers say that she’ll try on her own to finish Kate off.

It appears that Vivian will try to sneak into Kate’s room and make sure that Kate doesn’t survive her ordeal. Whether she’s planning to smother Kate with a pillow or perhaps tamper with her medical equipment remains to be seen, but this is Vivian we’re talking about, so anything goes! But unfortunately for Vivian, something or someone will interfere with her plan, so it looks like she’ll get interrupted and have to abort her mission.

That will leave Kate very much alive, but still in critical condition going forward. And Vivian will still have a problem on her hands – how to keep Kate from spilling what she did when she inevitably wakes up. Of course, since Kate is also guilty of a crime – after all, she did shoot and “kill” Vivian in the first place – perhaps Vivian will be able to strike a deal with Kate whereby they both keep their mouths shut and ultimately remain free women.

We’ll see what happens here, but it seems that Kate will survive Vivian’s second murder attempt and hopefully be on the road to recovery soon. Stay tuned to DOOL and don’t forget to check CDL often for the latest Days of Our Lives spoilers, updates, and news.