Days of Our Lives Spoilers: Kate Mansi and Billy Flynn Return, Big Casting News – What You Need to Know About Chabby Comeback 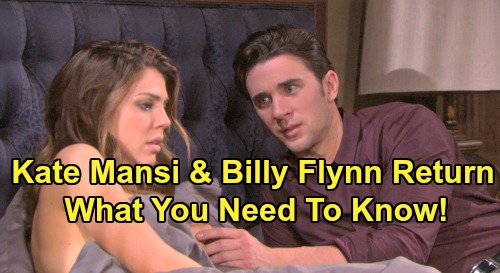 Days of Our Lives (DOOL) spoilers reveal that we’ve got some “Chabby” updates to pass along. You probably know by now that Chad DiMera (Billy Flynn) and Abigail DiMera (Kate Mansi) are headed back to DOOL later this year. They’ve already filmed plenty of scenes and are still on set filming more, so this is fantastic news for fans of the characters.

However, a recent cast chart shared by Jason47 offers clarity on their status. This chart reveals that Flynn is on contract while Mansi is in a recurring role. Of course, that’s likely Mansi’s choice. She hasn’t seemed interested in being locked in with a contract, but she still loves her Days family and the character she portrays. It’s great that we’ve got Mansi’s Abby however we can get her.

Another recast would’ve been a bad idea since we’ve already had so much Abigail upheaval. Marci Miller earned many fans as Abigail, but viewers can grow tired of new face after new face. Days was lucky when Mansi agreed to step back in after Miller’s departure. Mansi and Flynn’s chemistry has always been both sweet and steamy – the best of both worlds!

Unfortunately, Chad and Abigail’s relationship could be in jeopardy. Days of Our Lives has an exciting digital series, and the first season features “Chabby” in Paris. They’ve been facing obstacles as they try to balance work and home life. There’s even been some jealousy going on through threats to their romance. DOOL could be setting up issues that’ll continue once Chad and Abigail hit Salem this fall.

Word has it “Chabby” may split again, but they’re the kind of couple that always comes back around. Chad and Abigail are practically angst royalty! They’ve overcome too many hurdles to give up forever, so let’s hope the power of love will help Chad and Abby move into new chapters.