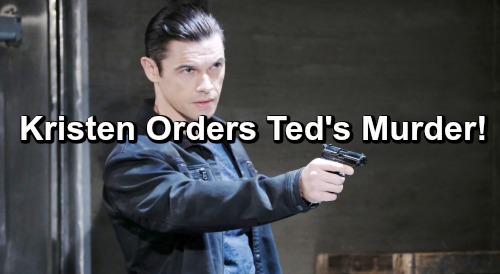 Days of Our Lives (DOOL) spoilers tease that Kristen DiMera (Stacy Haiduk) will realize she has to eliminate Ted Laurent (Gilles Marini). Of course, Kristen won’t plan to do the deed herself. She’ll call on Xander Cook (Paul Telfer) to get the job done. Xander doesn’t mind getting his hands dirty, so Kristen will deliver a deadly order on June 21.

This is all because Ted just had to go and play the hero. When Ted went after that autopsy report, he wasn’t doing it out of the kindness in his heart. This was all an attempt to look good in Hope Brady’s (Kristian Alfonso) eyes, so Kristen won’t have much sympathy. Not that she ever has any sympathy anyway!

Kristen needs Holly Jonas (Harlow and Scarlett Mallory) to stay dead, so she can’t have Ted running his mouth. After locking Ted up with Xander’s help, Kristen will mull it over and decide that Ted must die. She’ll think that’s the simplest solution and the one that comes with the fewest risks.

Days of Our Lives spoilers say Xander will agree to get rid of Ted permanently. He probably won’t care all that much when he learns what he has to do. Xander enjoying pushing Ted’s buttons and tossing around threats during all the Holly drama. It’s clear that Ted isn’t Xander’s favorite person, so DOOL fans can expect him to follow orders – at least at first.

However, a funny thing will happen a little later. Days of Our Lives spoilers say Xander will form a genuine connection with Ted. On June 24, Xander will see Ted’s softer side and perhaps show another glimpse of his own. Xander’s recent conversation with Maggie Kiriakis (Suzanne Rogers) brought a similar scenario. He may be a villain, but he’s a complicated and lovable one.

It sounds like Xander will let Ted go, but he’ll undoubtedly demand a promise in return. Xander might lie to Kristen about murdering their partner in crime. She’d probably do it herself if she thought Xander couldn’t go through with. Days spoilers hint that if Ted wants to stay alive, he’ll need to do what he’s told!

Some great episodes are coming up on the NBC soap. We’ll give you updates as other Days news comes in. Stick with DOOL and don’t forget to check CDL often for the latest Days of Our Lives spoilers, updates and news.