Days of Our Lives Spoilers: Kristen Reaches Out To Tony For Help – Long-Lost DiMera Brother Returns 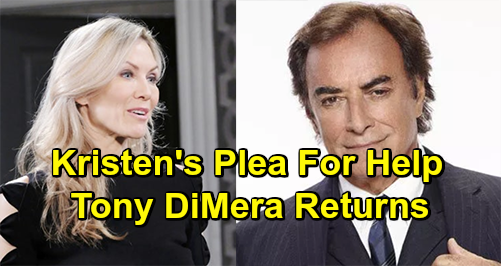 Days of Our Lives (DOOL) spoilers tease that Kristen DiMera (Stacy Haiduk) will eventually get her “Nicole Walker” (Arianne Zucker) mask back. It looks like it will take some finagling, but she’ll soon get back in action as Nicole, which means that she’ll be able to move freely around Salem once again.

Kristen has been facing a lot of opposition lately, both as Kristen and as Nicole. As DOOL viewers know, she’s been desperately trying to get her claws back into the DiMera empire.

She’s more than a little unhappy with the way Stefan DiMera (Brandon Barash) has been handling things at her family company and she’s definitely got her own ideas about how DiMera should be run.

But Kristen will soon realize that she’s in over her head. She’s battling not only Stefan, but Gabi Hernandez (Camila Banus), who is determined to have Stefan’s back. Gabi’s falling for Stefan hard, and she’s not going to let “Nicole” waltz in and wreck havoc on Stefan’s life. And that will lead to a major headache for Kristen.

And that’s not even considering the turmoil that Xander Kiriakis (Paul Telfer) has caused for Kristen. Of course, he’s the reason she was without her “Nicole” mask in the first place, and according to DOOL spoilers, he’ll soon formally end his alliance with Kristen. That will leave Kristen high and dry, and without a person to help her do her bidding.

So needing an ally, Kristen will soon reach out to a familiar person for help. As DOOL viewers may know, Thaao Penghlis, who has portrayed both Tony DiMera and Andre DiMera over the years, is returning do the show, along with Leann Hunley, who will be portraying Ana DiMera. And it’s been a big question about which DiMera brother Thaao will be playing this time around – Tony or Andre.

Tony DiMera Has Been Presumed Dead For More Than 10 Years

Well, as CDL reported Thaao Penghlis will be back on July 26, 2019, as none other than Tony DiMera. And on exact same day, other DOOL spoilers indicate that Kristen will reach out to a person from the past, as she’ll need an ally. That can only mean one thing – and that’s that Tony is going to be the person who Kristen reaches out to and ultimately helps her further her plans in Salem.

This should make for an interesting situation – after all, Tony’s been presumed dead for over 10 years now. Where’s he been all this time? Given that he “died” in University Hospital back in 2008, he was probably given Dr. Wilhelm Rolf’s (William Utay) back-from-the-dead serum shortly after his supposed death. But 11 years is a long time for Tony to have been gone and away from the people he knows in Salem.

It will be interesting to see what happens with Tony and Kristen going forward, and exactly what kind of alliance they form and what they plan for their younger brother Stefan. Are you looking forward to seeing Tony return? Stay tuned to DOOL and don’t forget to check CDL often for the latest Days of Our Lives spoilers, updates, and news.