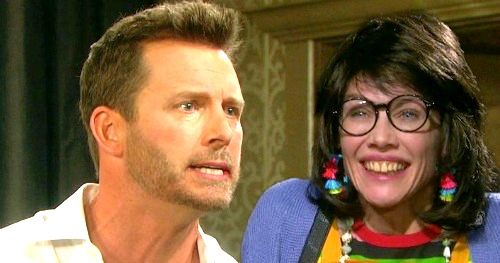 Days of Our Lives (DOOL) spoilers tease that Kristen DiMera (Stacy Haiduk) will decide she’s tired of this long-game strategy. She wants results now! The whole point of coming back to town and posing as Nicole Walker (Arianne Zucker) is to win over Brady Black (Eric Martsolf). Kristen would like to take over DiMera Enterprises as well, but that’d just be icing on the cake. What Kristen really wants is Brady.

That’s why Kristen will get tired of waiting around during the week of July 8-12. Since “Nicole” broke Eric Brady’s (Greg Vaughan) heart, Brady is hesitant to reignite this DOOL brother battle. He doesn’t think getting involved with “Nicole” again is a good idea. Plus, Brady believes “Nicole” is still grieving the loss of Holly Jonas (Harlow and Scarlett Mallory). He’s got plenty of reasons to drag his feet.

However, Kristen will refuse to take no for an answer. Days of Our Lives spoilers say “Nicole” will rev up the sexy pressure. She’ll flaunt what she’s got and hope Brady notices. “Nicole” will make quite a move on Brady, so he’s sure to be taken aback. Unfortunately, Kristen may get the same old answer. Brady will likely push “Nicole” away and insist this just isn’t going to happen.

Days of Our Lives spoilers state that a desperate Kristen won’t give up. She’s got another weapon in her disguise arsenal, so she’ll try to use it to her advantage. Kristen will dress up as Susan Banks (Stacy Haiduk) and make another move on Brady. After “Susan” shows up in Salem and does some flirting, Brady will be thrown for a loop.

Kristen clearly hasn’t thought this through. Why would she think Brady would be interested in Susan of all people? Days fans know the woman’s a nut and isn’t so easy on the eyes. Brady could have his pick of almost any woman in town, so it’s safe to say it’ll be a hard pass on “Susan.”

Of course, Brady could develop suspicions as time goes on. Kristen has posed as Susan before, so Brady may think of that eventually. There are bound to be little ways for Kristen to slip up and point Brady in the right direction. She’ll be a desperate woman doing desperate things, which is exactly when mistakes tend to be made.

It sounds like some exciting drama’s ahead on the NBC soap. We’ll give you updates as other Days news comes in. Stay tuned to DOOL and don’t forget to check CDL often for the latest Days of Our Lives spoilers, updates and news.