Days of Our Lives Spoilers: Kristen Sneaks Her Way Into DiMera – Stefan Gives ‘Nicole’ A Job

BY hellodrdavis on June 2, 2019 | Comments: one comment
Related : Days of Our Lives, Soap Opera, Spoiler, Television 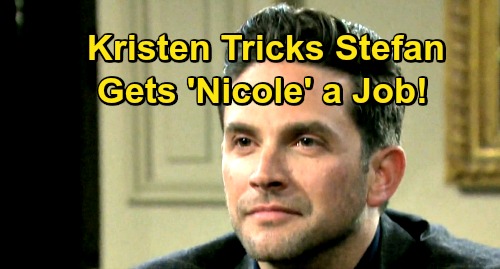 Days of Our Lives (DOOL) spoilers tease that Stefan DiMera (Brandon Barash) will be the next in line to get duped by Kristen DiMera (Stacy Haiduk). As DOOL viewers know, Kristen has come back to Salem in a very big way, but she’s disguised as Nicole Walker (Arianne Zucker). Equipped with a Nicole mask and a voice-changing device, Kristen’s got everyone fooled into thinking she’s Nicole.

Kristen has successfully fooled Eric Brady (Greg Vaughan) into believing she’s Nicole, and she’s even made out with Brady Black (Eric Martsolf) on one occasion and he couldn’t tell that she was really Kristen, so her disguise must be pretty good.

Well, it won’t be long before Kristin sets her sights on getting back into the family business. She doesn’t know Stefan that well, but she’s keenly aware that he’s running DiMera Enterprises, and she’ll decide that she wants a piece of the action. But she’ll want to keep her Nicole disguise intact, so she’ll decide to approach Stefan as “Nicole.”

As Nicole, Kristen will probably play the “distraught mother” card, since she allegedly just lost Holly Jonas (Harlow and Scarlett Mallory). According to DOOL spoilers, she’ll approach Stefan and ask him for a job at DiMera. It looks like her ruse will fool Stefan, and he’ll agree to let her come work for the family company.

But what could Kristen’s plan be at DiMera? Chances are, she’ll want access to some cash and some resources that will help her with her master plan. DOOL viewers know that Kristen’s first and foremost goal is to get Brady, but surely she’s got more devious plans. And it seems that access to DiMera will get her started down that road.

Of course, Kristen’s ruse can’t last forever, and when the truth finally comes out and “Nicole” is revealed as Kristen, Stefan’s not going to be very happy about being deceived. But those DiMeras tend to stick together, so chances are he won’t stay mad for long.

What do you think Kristen’s ultimate goal will be in infiltrating her family’s company? Stay tuned to DOOL and don’t forget to check CDL often for the latest Days of Our Lives spoilers, updates, and news.