BY hellodrdavis on June 2, 2019 | Comments: one comment
Related : Days of Our Lives, Soap Opera, Spoiler, Television 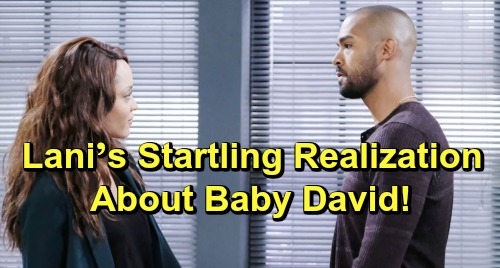 Days of Our Lives (DOOL) spoilers tease that Lani Price (Sal Stowers) will come to a big realization. She’s been spending all of her time lately doting on David Ridgeway, Jordan Ridgeway’s (Chrishell Hartley) little boy. Since Jordan is in Bayview and can’t care for her son, Lani’s been playing the “mom” role for the infant, and she’s completely enchanted by him.

But others have worried that perhaps Lani is taking things too far with David. After all, the baby isn’t hers, but he shares the same name with the baby that she and Eli Grant (Lamon Archey) lost last year. Both Abe Carver (James Reynolds) and Eli have expressed concern with the level of attachment that Lani has for David, especially since someday Jordan is going to come back for her son.

Plus, Eli has been miffed because Lani has been totally neglecting her relationship with him in order to care for David. Eli just wants to spend time with his girlfriend, and he’s been feeling neglected lately. Unfortunately, according to Days of Our Lives spoilers, Eli will finally decide that he’s had enough and call it quits with Lani.

Then, in a stunning development, Lani will make a move on Rafe Hernandez (Galen Gering), with whom she’s been caring for David. According to DOOL spoilers, Rafe will be flattered but he’ll confess the he really has no interest in or feelings for Lani. That will probably leave Lani feeling confused, but it may also lead her to a moment of clarity about what she’s been doing with her life lately.

Days of Our Lives spoilers say that Lani will come to a realization about her relationship with baby David. Perhaps after her rejection by Rafe she’ll be feeling introspective about what she’s been doing. She might realize that she’s transferred some of her motherly instincts that she couldn’t realize after her own baby died onto David.

If Lani does gain a moment of clarity about everything, she might realize that she made a very big mistake by ignoring her relationship with Eli in order to be with David full-time. But at this point, would she even be able to get Eli back, or will she have pushed him too far away? Eli’s been hurt, and he’s a bit resentful, so she could have a hard time winning him back, if she’s so inclined.

Exactly what Lani’s big realization about David is, but we think that if she comes to realize that she really wants Eli back, she could have an uphill battle. Do you think that Eli and Lani will ever get back together? Stay tuned to DOOL and don’t forget to check CDL often for the latest Days of Our Lives spoilers, updates, and news.