BY hellodrdavis on December 9, 2019 | Comments: one comment
Related : Days of Our Lives, Soap Opera, Spoiler, Television 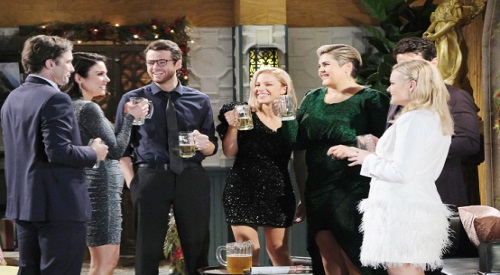 Days of Our Lives spoilers recap for “Last Blast Reunion” Chapter 1, Episode 2 reveal that the Salem High class of 2002 continued their reunion at .com in New York City. The action all got underway on the DOOL app, where you can stream the series. Phillip Kiriakis (Jay Kenneth Johnson) greeted both Chloe Lane (Nadia Bjorlin) and Belle Black (Martha Madison) at the cafe after breezing in the front door. There was a little awkwardness, given that both Phillip and Chloe were involved in relationships with Phillip over the years.

Viewers were then treated to some amazing vintage flashbacks of Phillip and Chloe, then of Phillip and Belle. Afterwards, it was established that all three of them are still friends despite everything they’d been through together. Phillip and Belle were innocently hugging when Shawn Brady (Brandon Beemer) walked in and caught them, leading to some more awkward moments. Phillip attempted to shake Shawn’s hand, which Shawn outright refused.

The rest of the crew then emerged from a back room, and Kevin Lambert (Chadwick Hopson) brought a tray of beers, announcing that they brew their own beer at the cafe. He, Shawn, Belle, Chloe, Phillip, Susan Adamson (Lindsay Hollistar), and Mimi Lockhart (Teressa Liane) dug into the beer and started reminiscing about old times, with a few additional flashbacks thrown in for good measure.

Meanwhile, at their NYC apartment, Craig Wesley (Kevin Spirtas) and Nancy Wesley (Patrika Darbo) mused about the superhero movie they just attended with Chloe’s son, Parker Jonas (Christian Ganiere). Nancy thought the movie was awful, and that a good old-fashioned love story where boy meets girl is better. They then mused about how Chloe and her friends were probably sitting around reminiscing about the good old days.

And indeed, the Last Blast crew was having a great time at the cafe. They joked about old times and drank their beers, and Phillip and Shawn even engaged in an arm-wrestling contest. Things got a little tense as Shawn referenced Philip sleeping with Belle at one point, and of course Mimi got in a dig about Chloe not being able to keep her clothes on, but other than that, it seemed like the group had a great time.

Finally, Shawn mentioned their old friend Jason Welles (Aaron Van Wagner) and what ever happened to him. Belle said that she invited him to the reunion, but he didn’t RSVP, and Kevin thought he might know why. Apparently, Jason had approached Kevin with a request for capital for a business venture last year, and Kevin turned him down, which Jason didn’t take well.

The group then offered a cheers to Jason for not showing up, and to everyone who was in attendance and all the memories – the good, the bad, and the ugly. As they offered up a happy toast to the Last Blast Crew, a mystery person ominously looked in the window from outside as dark music played.