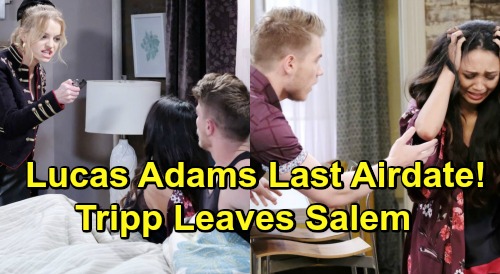 Days of Our Lives (DOOL) spoilers has some news to pass on about a popular DOOL star. The final air date for Lucas Adams, who portrays Tripp Dalton on the NBC soap, has been announced. According to Daytime Confidential, Tripp will last be seen on the show on August 27, 2019.

According to the report, his exit was storyline-dictated, but his character could conceivably return in the future. That’s good news for Tripp fans!

As DOOL viewers know, Tripp has just wrapped up a big storyline involving Claire Brady (Olivia Rose Keegan), who recently departed the show as well. Claire became completely unhinged and tried to kill several people over the past year, Tripp being one of them. Claire’s final demise came after Tripp married Haley Chen (Thia Megia) to keep her in the country.

According to Days of Our Lives spoilers, Tripp will soon become involved with Haley once again. Of course, when the two married earlier this year, it was solely to prevent Haley from being deported and there was no romantic relationship between the two. Haley’s romantically involved with JJ Deveraux (Casey Moss), and their relationship seems pretty strong.

Still, DOOL spoilers say that Tripp is going to get himself in a bit of trouble as he tries to help Haley, who will soon experience nightmares and hallucinations of Claire. One of her visions will apparently involve Claire stabbing Tripp, so she’ll really need some help to get past it.

But since Haley will be sensitive about getting help due to her suicide attempt last year, she’ll refuse to seek professional help for her difficulties. Meaning well, Tripp will try to help her by offering her some tranquilizers that he’s prescribed, and that will lead to an uncomfortable scenario in which Haley falls asleep in his arms.

It looks like Tripp is going to discover that he’s starting to develop feelings for Haley, and that will lead to some inner conflict on his part. He won’t want to interfere with Haley’s relationship with JJ, since the two seem to be madly in love.

And all of this may well set up Tripp’s exit. Perhaps his feelings for Haley will grow, and he’ll decide that it would be best for him to leave town for a while and just get away from the Salem scene. That would certainly leave things open for a return down the road.

At any rate, it will be sad to see Tripp go, but hopefully he’ll be back sooner rather than later. Will you be sorry to see Tripp leave Salem? Stay tuned to DOOL and don’t forget to check CDL often for the latest Days of Our Lives spoilers, updates, and news.