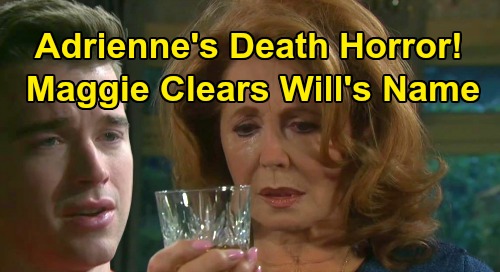 Days of Our Lives (DOOL) spoilers tease that the mystery surrounding Adrienne Kiriakis’ (Judi Evans) death will finally unravel. DOOL has some special episodes coming up in January, which will reveal a great deal about what went down. There’ll still be a few questions left unanswered, but many details will be shown to viewers – including who really killed Adrienne and how.

Here’s what Days of Our Lives spoilers have divulged so far. Will Horton (Chandler Massey) was set up, so he simply believes he killed Adrienne. The real culprit is Maggie Kiriakis (Suzanne Rogers), but she has no clue. Maggie was drunk at the time of the accident, so she woke up with a hangover and no memory of the event. In an effort to protect Maggie, Victor Kiriakis (John Aniston) and Xander Kiriakis (Paul Telfer) covered up her involvement and pinned it on Will.

Can you imagine the devastation Maggie’s going to endure? She’ll ultimately learn she’s the reason Justin Kiriakis (Wally Kurth) lost his wife and Sonny Kiriakis (Freddie Smith) lost his mother. Maggie’s also indirectly the reason Sonny and Will’s marriage was torn apart. She obviously wasn’t behind Will’s setup, but he still wouldn’t be sitting in prison right now if it weren’t for Maggie’s deadly actions.

After Maggie moves past her shock and has dealt with her despair, anger should come next. Victor and Xander think they did Maggie a favor by protecting her, but she won’t have the same perspective. Maggie’s bound to be livid about the cover-up, which led to Will’s imprisonment. It’s not fair that Will’s had to battle all this guilt when he’s not even to blame.

Days of Our Lives spoilers say Victor and Xander may regret their actions in the end. As for Maggie, you can bet she’ll want to take responsibility. There’s no way Maggie will stand by and let Will suffer for something she did.

It sounds like some gripping drama’s ahead in Salem. We’ll give you updates as other Days news comes in. Stay tuned to DOOL and don’t forget to check CDL often for the latest Days of Our Lives spoilers, updates and news.