Days of Our Lives Spoilers: Marlena Issues A Warning – Tells Sarah Not To Date Dangerous Xander 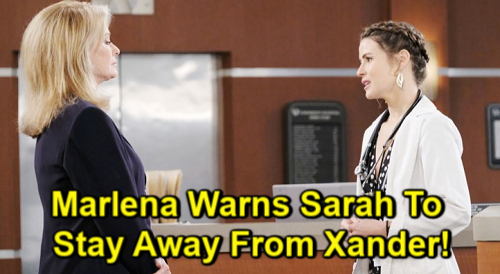 Days of Our Lives (DOOL) spoilers tease that Sarah Horton (Linsey Godfrey) will get a big warning. As DOOL viewers know, Sarah has been spending a lot of her time with Xander Kiriakis (Paul Telfer) lately. Ever since Xander found out about Sarah’s pregnancy, he has been on hand to support her and he’s been her confidante even though Sarah has very mixed feelings about him. But given that Sarah doesn’t want anyone else to find out about her pregnancy, she really needs his support and advice.

Xander even convinced Sarah to be his date to Lani Price (Sal Stowers) and Eli Grant’s (Lamon Archey) upcoming wedding. It took a bit of cajoling, but he managed to convince Sarah to accompany him to the event. Sarah reluctantly agreed, but DOOL viewers could tell that Sarah’s really starting to change her feelings toward Xander. Little by little, she’s coming to like him, and she doesn’t even seem to mind spending time around him anymore.

But it seems that Sarah’s decision to attend Lani and Eli’s wedding with Xander will cause a bit of a stir. It will be her first big public outing since her short-lived relationship with Eric Brady (Greg Vaughan) ended, and apparently people will be shocked to see her as Xander’s “date” for the wedding. Of course, the two of them won’t be together as a couple for real, but it will probably appear to others that Sarah might be falling for Xander.

Of course, DOOL viewers know that at some level, Sarah is falling for Xander, but she’s in denial and hasn’t admitted it to herself. She and Xander already share some of the elements of a real relationship – they share a big secret, and there’s some element of trust between them since Xander is keeping the secret for Sarah. Viewers can certainly see the spark there, even if Sarah can’t, and that’s got us wondering if perhaps Sarah and Xander will be together as a real couple after the DOOL time jump.

At any rate, Sarah and Xander will be at the wedding together, and it seems that this will attract some attention. DOOL spoilers indicate that Marlena Evans (Deidre Hall) will notice and wonder what’s going on. Of course, DOOL viewers will remember that Marlena’s got a huge beef with Xander since he’s the person who shot her at her wedding to John Black (Drake Hogestyn) last year. Xander was aiming for Eric and shot Marlena, which understandably rubs Marlena the wrong way.

Well, it seems that Marlena will pull Sarah aside and issue her a stern warning about the dangers of dating Xander. She’ll probably point out Xander’s long history of being a henchman for Kristen DiMera (Stacy Haiduk) as well as how he essentially held Nicole Walker (Arianne Zucker) hostage and kept her from Eric for all those months. It looks like Marlena will tell Sarah that she needs to get out now while she still can.

Of course, Sarah will probably protest that she’s not “dating’ Xander, and that she’d never be with him, and so on. But Marlena’s pretty sharp, and she’ll probably be able to see what DOOL viewers see – that Sarah is starting to develop feelings for Xander despite herself. And that will get Marlena deeply concerned. Of course, we have to remember that Marlena was always a huge supporter of Eric and Sarah’s relationship, so she probably has an ulterior motive here.

At any rate, it doesn’t look like Sarah’s going to break off her friendship with Xander, despite what Marlena has to say. She really can’t at this point, since Xander knows about her pregnancy and is her only real source of support about that right now. But will we see Xander and Sarah actually get together as a couple down the line? We think there’s a good chance they’ll wind up closer during the time jump.

What do you predict? Do you think that Sarah and Xander will wind up together as a couple after the time jump? Stay tuned to DOOL and don’t forget to check CDL often for the latest Days of Our Lives spoilers, updates, and news.