Days of Our Lives Spoilers: Melinda’s Secret Could Save Haley – Is She Haley’s Mother? 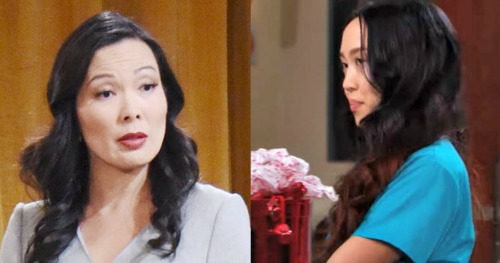 Days of Our Lives (DOOL) spoilers tease that Haley Chen (Thia Megia) and Tripp Dalton (Lucas Adams) are in for some big trouble. They don’t know it, but they’ve got a saboteur working behind the scenes to derail their impending wedding. Haley and Tripp are pretending to be a young couple in love, when in reality they are marrying so that Haley can remain in the county. And Claire Brady (Olivia Rose Keegan) absolutely hates the arrangement. She’s determined to prevent them from tying the knot.

According to DOOL spoilers, Claire will reel after her plan with Eve Donovan (Kassie DePaiva) to expose Haley and Tripp’s marriage as a fraud blows up. Unfortunately for Claire, something or someone erased the tape that she made of Tripp admitting that the marriage was a sham. But that won’t stop Claire. Days of Our Lives spoilers say that she’ll make another recording and plan to use it herself in order to stop the marriage.

And so, Tripp and Haley’s wedding day will be one to remember, as Claire crashes the wedding and announces that it cannot happen, as she has proof that the whole thing is a fraud designed to keep Haley in the country. And when this happens, it’s really going to look like Haley is out of options and will be swiftly deported.

But there might still be hope for Haley, and that hope may come from an unlikely source. Haley’s sister Melinda Trask (Laura Kai Chen) hasn’t really been on her sister’s side throughout this whole immigration nightmare.

Melinda has cared for her sister financially for all of these years, but she hasn’t been emotionally close to Haley, and she certainly hasn’t been supportive since her sister’s immigration status was outed.

But could Melinda be her sister’s last hope? We think it’s likely, since DOOL has been dropping some subtle hints here and there about Melinda’s relationship with Haley. A while back, Melinda had an over-reaction when someone wrongly assumed that she was Haley’s mother. She was a bit too quick to point out that she was, in fact, Haley’s sister.

And recently, Melinda was shown looking sadly at a photo of Haley during her younger days. We can’t help but wonder whether Melinda could in fact be Haley’s birth mother. There’s certainly enough of an age difference between the two for them to be mother and daughter.

Melinda could have had Haley as a teenager, and their parents may have decided to raise Haley as their own. Stranger things have happened.

And then there’s a DOOL spoiler indicating that Melinda’s got a secret that could save Haley. That certainly sounds like Melinda’s got game-changing information about her “sister” that could keep Haley from getting deported.

But Melinda would really have to go out on a limb and admit something potentially painful from her past to the whole world, and we know how important image is to Melinda.

We’ll see what happens, but it looks like Haley may be in for a big surprise soon. Do you think that Haley is actually Melinda’s daughter? Stay tuned to DOOL and don’t forget to check CDL often for the latest Days of Our Lives spoilers, updates, and news.