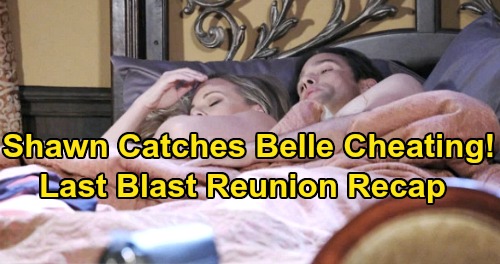 Days of Our Lives spoilers recap for “Last Blast Reunion” Chapter 1, Episode 5 tease that Nancy Wesley (Patrika Darbo) and Craig Wesley (Kevin Spirtas) were devastated by their daughter Chloe Lane’s (Nadia Bjorlin) death. They consoled each other in their apartment, where Chloe was stabbed to death, and wondered how they were going to tell Parker Jonas (Christian Ganiere) that his mother was gone forever.

Craig then noted that Parker was with his aunt, so they had some time to figure out how they were going to tell the little boy that his mother was dead. Nancy cried and was horrified by the whole tragedy, especially about how Phillip Kiriakis (Jay Kenneth Johnson) must have felt finding Chloe stabbed to death on the floor.

Meanwhile, back at Belle Black’s (Martha Madison) hotel room, she and Phillip poured themselves some scotch to calm their nerves about Chloe’s murder. Belle wanted to know if Phillip had gone to see Chloe about Kevin Lambert’s (Chadwick Hopson) murder, but Phillip said no. He revealed that he was going to tell Chloe how he felt about her but it was too late.

Later, after drinking a considerable amount of scotch, Belle left another message for Shawn Brady (Brandon Beemer), who was on his way to Hong Kong, and lamented with Phillip about the loss of Chloe. They noted how strong and brave Chloe was, and Belle leaned on Phillip’s shoulder for comfort. They declared they were there for each other, then suddenly kissed and fell back onto the bed. After making love, they noted that they had done this – again.

Suddenly the door opened, and Shawn walked in, seeing Phillip and Belle on the bed. “Seriously?” he yelled. Turns out, Shawn got Belle’s message and decided to come back to the hotel. Angry, Shawn lunged in the direction of Phillip, and yelling ensued. Belle then yelled that Chloe was dead and had been stabbed just like Kevin. Shawn was upset by the news but left in disgust after telling Belle and Phillip that he never wanted to see them again.

Belle hurriedly got dressed and tried to call Shawn but got no answer. Belle was beside herself with worry, while Phillip insisted that their lovemaking meant nothing. Belle noted that this wouldn’t make Shawn feel any better. Belle decided that she had to find Shawn and talk to him asap.

Shawn then went to Mimi Lockhart’s (Teressa Liane) room and informed her about Belle sleeping with Phillip again. Mimi was sorry and insisted that she tried to warn Phillip about this. Shawn got a couple digs in against Phillip and ignored an incoming call from Belle, then sat down on the bed with Mimi. Mimi tried her best to comfort Shawn, saying that Belle and Phillip were fools.

Finally, Belle appeared at Mimi’s door. She knocked loudly and yelled that she was looking for Shawn because she totally screwed up with him. She then noticed that the door to the room was open, and as she walked in she saw Mimi laying on the floor, with a knife sticking out of her chest, dead, with Shawn nowhere to be found.