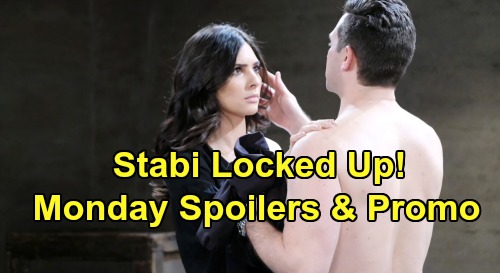 Days of Our Lives (DOOL) spoilers for Monday, August 19, tease that Kate Roberts (Lauren Koslow) will accept Mr. Shin’s (Michael Hagiwara) offer. He just joined Kate at Doug’s Place to make a proposal, which involves bending the rules just a bit. DiMera Enterprises is supposed to have a DiMera family member on the throne, but Kate technically isn’t one at the moment.

However, Kate was married to Andre DiMera (Thaao Penghlis) before his death. It seems Mr. Shin will insist that’s good enough, and he won’t have to twist Kate’s arm! She’ll gladly take the DiMera CEO spot, which is sure to stir up some trouble.

“Nicole DiMera” (Arianne Zucker), Gabi DiMera (Camila Banus) and Stefan DiMera (Brandon Barash) aren’t going to like this, but they all have worse problems right now. Gabi was horrified when she ripped “Nicole’s” mask off and realized Kristen DiMera (Stacy Haiduk) was underneath. Days of Our Lives spoilers say Stefan will show up after Gabi’s attacked, so he’ll rush to her injured side.

DOOL fans can expect Kristen to go after Stefan next. He’ll be knocked out along with Gabi, so they’ll ultimately wake up in the DiMera secret room. Gabi will determine that Kristen has been posing as “Nicole” ever since her return from the dead. She’ll fume over their hostage situation, but at least this will give Stefan and Gabi a chance to reconnect.

Other Days of Our Lives spoilers state that Maggie Kiriakis (Suzanne Rogers) will have great news. She’ll give someone updates on her sobriety, which is definitely back on track. Maggie had a rough time after Holly Jonas’ (Harlow and Scarlett Mallory) “death.” Her relationship with Victor Kiriakis (John Aniston) also got a little rocky, but Maggie’s taken charge of her life and is on a better path.

Over with Brady Black (Eric Martsolf), he’ll let Eric Brady (Greg Vaughan) know he’s reunited with “Nicole.” Days spoilers say Eric should be upset about that, but he may also want to move on. Now that Eric is with Sarah Horton (Linsey Godfrey), he might try to truly put “Nicole” behind him and focus on the future.

Of course, Eric’s plans will change thanks to some looming “Nicole” revelations! We’ll keep you posted as other Days details emerge. Stay tuned to DOOL and don’t forget to check CDL often for the latest Days of Our Lives spoilers, updates and news.