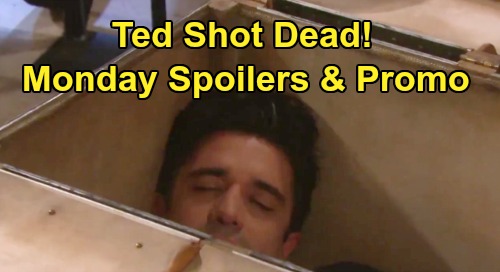 Days of Our Lives (DOOL) spoilers for Monday, August 5, tease that Stefan DiMera (Brandon Barash) will battle confusion. He was ready to celebrate Gabi DiMera’s (Camila Banus) big victory, but she had a better idea. Gabi suggested Stefan should pack his bags and get out of her house! She’ll insist that since she’s secured control of everything Stefan owns, he’s no longer of any use to her.

Stefan will struggle to understand since he thought Gabi had real feelings for him. To be fair, Days viewers know she does. It’s just that Gabi’s desire for revenge is winning out right now. She’ll tell Stefan all about her devious plan to take him down. Gabi will gloat about how Stefan fell for her plot hook, line and sinker.

Days of Our Lives spoilers say Stefan will fume as he realizes he’s been duped. Of course, he’ll be pretty heartbroken as well. Stefan was truly in love, so he’ll sting when Gabi tries to convince him it was all a lie. However, Gabi’s guilt will start leading her in a new direction later this week. She’s not as through with Stefan as she thinks she is.

In the meantime, Rex Brady (Kyle Lowder) will explode at Eric Brady (Greg Vaughan). He’ll rant about his brother stealing Sarah Brady’s (Linsey Godfrey) heart, but Eric will do his best to explain. It’s not like Eric planned to fall for Sarah, and she didn’t plan to fall for him either. Eric may point out that he was willing to respect the boundaries of their marriage, but Rex will feel like that marriage was based on a lie.

While Rex lashes out, Ted Laurent (Gilles Marini) will confront “Nicole DiMera” (Arianne Zucker) and Tony DiMera (Thaao Penghlis) about all their trickery. “Nicole” will once again unmask herself for this fierce faceoff, which will quickly turn violent. Days of Our Lives spoilers say things will take a deadly turn by the end of Monday’s episode. DOOL fans can expect Ted to take a bullet from Tony’s gun!

Ted will die from the gunshot wound, so more trouble’s brewing in Salem. We’ll give you updates as other Days news comes in. Stay tuned to DOOL and don’t forget to check CDL often for the latest Days of Our Lives spoilers, updates and news.