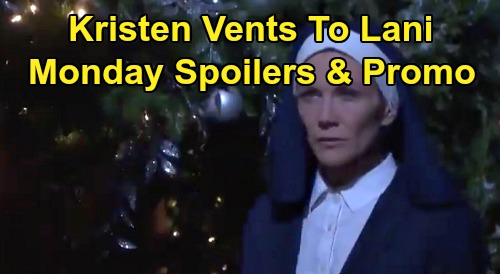 Days of Our Lives (DOOL) spoilers for Monday, December 30, tease that Gabi Hernandez (Camila Banus) will make her way to the Gabi Chic in the square. She’s in for a shock when she sees that the place has been vandalized. DOOL fans know Lani Price (Sal Stowers) just couldn’t contain her fury. She marched right up to the window of her enemy’s store and threw a heavy holiday poinsettia urn through it.

Gabi will see the aftermath in Monday’s episode, so she’ll be stunned by all the shattered glass. She’ll wonder who would do such a thing, but it probably won’t be long until she points the finger at Chad DiMera (Billy Flynn) and Abigail DiMera (Kate Mansi). Since Gabi doesn’t know Lani’s back in town, she should assume Chad and Abby took their feud with her to a new level.

However, Eli Grant (Lamon Archey) may not think that’s Abigail and Chad’s style. They clashed with Gabi before the damage was done, but they were mostly just annoyed. Chad and Abigail certainly weren’t angry enough to go commit a crime. Days of Our Lives spoilers say Eli will do some investigating for Gabi later this week – and he’ll ultimately settle on Lani as the true culprit.

In the meantime, Kristen DiMera (Stacy Haiduk) will fume over the kiss she just witnessed. Nicole Walker (Arianne Zucker) seemed a bit tipsy as she practically fell on Brady Black’s (Eric Martsolf) lips. Kristen was there to see the smooch and will soon start venting to Lani. Once Lani hears what happened, she’ll do her best to calm Kristen down and convince her to stick to their plan.

Other Days spoilers say Kate Roberts (Lauren Koslow) will lash out at Stefano DiMera aka Steve Johnson (Stephen Nichols). She’ll threaten to reveal Stefano and blow up his scheme to win Marlena Evans’ (Deidre Hall) heart, but he may deliver a threat in return. Kate will eventually relent and keep Stefano’s secret for now, but New Year’s Eve will bring the revelation of “Steve’s” comeback.

Until then, Days of Our Lives spoilers say Marlena will corner “Hope Brady” aka Princess Gina Von Amberg (Kristian Alfonso). John Black (Drake Hogestyn) told Marlena about “Hope’s” admission, so Marlena will confront “Hope” about her feelings. She’ll make it clear that John’s off-limits, but Princess Gina won’t let that stop her!

Days spoilers say Princess Gina will try another angle in the weeks ahead, so stay tuned. We’ll give you updates as other DOOL news comes in. Stick with the NBC soap and don’t forget to check CDL often for the latest Days of Our Lives spoilers, updates and news.