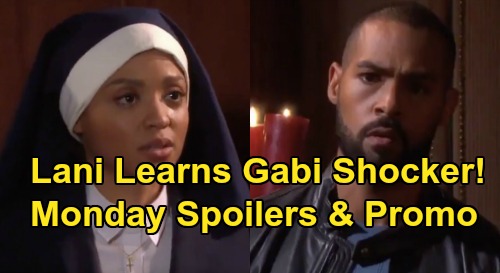 Days of Our Lives (DOOL) spoilers for Monday, December 9, tease that Eli Grant (Lamon Archey) will struggle to make sense of what’s right in front of him. He was floored to see Lani Price (Sal Stowers) at the convent, and she was certainly stunned to see Eli as well. They’ll both have to wrap their heads around this shocking encounter.

Lani will naturally wonder what brings Eli to Rome, so he’ll admit he’s on a mission for Gabi Hernandez (Camila Banus). He’ll let Lani know he’s working for Gabi AND sleeping with her. Days of Our Lives spoilers say Eli will want to hurt Lani like she hurt him. He doesn’t realize Gabi’s the reason Lani was forced to dump him at the altar and shatter his heart.

Days of Our Lives spoilers say Lani will have a hard time hiding her pain. It’ll be tough for Lani to hear that Gabi not only destroyed her happiness with Eli – Gabi swooped in and stole Eli for herself. Part of Eli will enjoy seeing Lani suffer. Since he doesn’t have the whole story, Eli will be feeling pretty vengeful.

Of course, Eli’s bitterness is nothing compared to JJ Deveraux’s (Casey Moss). DOOL fans know JJ followed Eli to Rome in hopes of tracking down Kristen DiMera (Stacy Haiduk). He just found her outside the convent and pulled a gun on her, so he’ll have a few things to get off his chest on Monday. JJ will undoubtedly rant about losing Haley Chen (Thia Megia) and how much heartache it’s caused him.

Kristen’s really been beating herself up, so she probably won’t put up much of a fight. She may suggest JJ should do his worst if it’ll help him somehow. Kristen doesn’t seem to think her life’s worth much anymore, but Lani will disagree when she arrives on the scene. Days of Our Lives spoilers say Lani will stumble across this scary situation, so she’ll immediately start begging JJ to spare Kristen.

Back in Salem, Abigail DiMera (Kate Mansi) will take her mom on a little field trip. Jennifer Horton (Melissa Reeves) will return to the scene of the crime and reflect on the night she was pushed. Days spoilers say Jenn will end up having another memory related to the incident. She won’t remember everything, but she could put Abigail a step closer to exposing “Princess Gina Von Amberg” aka Hope Brady (Kristian Alfonso).

Other Days of Our Lives spoilers state that Chad DiMera (Billy Flynn) will make a confession. He’ll come clean to Kate Roberts (Lauren Koslow) about being in touch with “Stefano DiMera” aka Steve Johnson (Stephen Nichols), so Kate will surely offer her opinion. She’s never shy about sharing it!