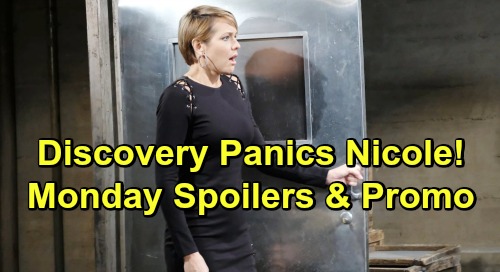 Days of Our Lives (DOOL) spoilers for Monday, July 8, tease that Rex Brady (Kyle Lowder) will have a confession to make. When he meets back up with Sarah Brady (Linsey Godfrey), Rex will admit he gave the necklace to Chloe Lane (Nadia Bjorlin). Days fans know Sarah wasn’t planning on wearing it again, but she may still think it should’ve gone back to Xander Cook (Paul Telfer) – who cared enough to give it.

Nevertheless, Rex will likely stand by his decision and urge Sarah to let it go. Where this necklace ends up is pretty much the most trivial problem in Salem, so they’ll hopefully move on soon. Meanwhile, Days of Our Lives spoilers say Brady Black (Eric Martsolf) will come clean about Gabi Hernandez’s (Camila Banus) plot. He’ll tell Chloe all about how Gabi plans to take down Stefan DiMera (Brandon Barash).

Chloe will be taken aback by the news and might even feel bad for Stefan on some level. However, Brady may remind Chloe that Stefan deserves whatever he’s got coming. Chloe should agree that Stefan was scum for sneaking around with Gabi. The fact that Gabi seduced him was no excuse. It was up to Stefan to resist if he wanted a future with Chloe, but he was powerless to stop his feelings.

Stefan and Gabi are a better match anyway, which is why it’s dangerous to put this DOOL secret in Chloe’s hands. Despite her continued scheming, Gabi’s actually falling for Stefan. Chloe will have the ability to blow this for Gabi at any moment, but it looks like she’d rather see Stefan go down for now.

Other Days of Our Lives spoilers say “Nicole Walker” (Arianne Zucker) will react to her latest discovery. She just found Kate Roberts (Lauren Koslow) and Ted Laurent (Gilles Marini) in the secret room, so she’ll immediately fume over Xander’s deception. He assured Kristen DiMera (Stacy Haiduk) that their problems were dead and buried, so she’ll seethe as she realizes she’s been betrayed.

“Nicole” will leave Ted and Kate in the DiMera tunnels for the time being, but she’ll definitely have a bigger mess to deal with later! We’ll give you updates as other Days details emerge. Stay tuned to DOOL and don’t forget to check CDL often for the latest Days of Our Lives spoilers, updates and news.