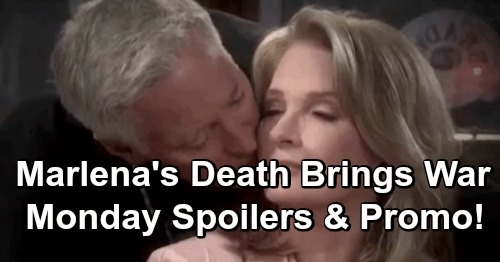 Days of Our Lives (DOOL) spoilers for Monday, March 18, tease that an out-of-body experience is on the way for Dr. Marlena Evans (Deidre Hall). She just flatlined at the hospital, so John Black (Drake Hogestyn) is feeling broken and helpless. Dr. Kayla Johnson (Mary Beth Evans) doesn’t seem to think anything more can be done, but John just won’t accept that this is really the end.

While John begs Kayla to keep trying, Marlena’s soul will leave her body. Her death will leave it up for grabs as she enters a white room and runs into Tony DiMera (Thaao Penghlis). Marlena will want to go back, but Tony will insist that just isn’t possible. He’ll think it’s time for Marlena to face the facts and prepare to depart.

Andre DiMera (Thaao Penghlis) will appear soon after, so the more sinister DiMera will push Marlena to come with him. Princess Gina (Kristian Alfonso), Hope Hernandez’s (Kristian Alfonso) evil doppelganger, will also chime in on this. They’ll beckon Marlena toward the darkness, but she’ll resist and think about her family instead.

Days of Our Lives spoilers say Marlena will imagine all the horrible scenarios that would happen in her absence. She’ll naturally think of John and how this loss would affect him. Marlena will also worry about her kids and grandkids spiraling out of control. She’s their go-to person for advice, so they’d be lost without her support and guidance. 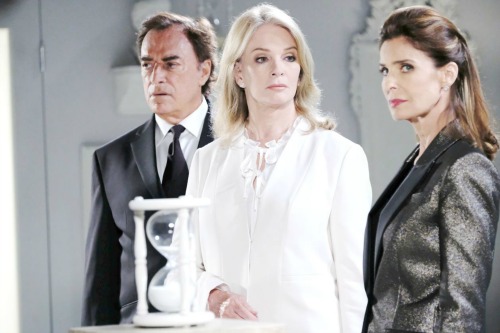 DOOL fans can expect Belle Black (Martha Madison) to pop up for a few scenes. She’ll hold Marlena’s urn and mourn for her mother, but her grief will eventually be put on hold. That’s because Claire Brady’s (Olivia Rose Keegan) terrible behavior will get even worse. She’s bad enough in the regular version of Salem, but her scheming will land her in legal trouble in this new reality.

A handcuffed Claire will try to explain her apparent arrest, but Belle will certainly feel in over her head. Meanwhile, Leo Starke (Greg Rikaart) will tighten his grip on Will Horton (Chandler Massey). Poor Will’s going to be separated from Sonny Kiriakis (Freddie Smith) all over again in this alternate Salem universe.

Other Days of Our Lives spoilers say Brady Black (Eric Martsolf) and Eric Brady’s (Greg Vaughan) feud will explode. They’ll throw punches as they spar over their women troubles and Eric’s track record. This obviously isn’t what Marlena will want for her son and stepson. It’ll break her heart to think of them destroying their bond, so that’ll help bring Marlena back from the brink of death.

Thankfully, Days spoilers state that John will get a miracle. Marlena’s heart will begin beating again, so John will be reunited with “Doc” – much to Diana Cooper’s (Judith Chapman) dismay! We’ll give you updates as other Days news comes in. Stay tuned to DOOL and don’t forget to check CDL often for the latest Days of Our Lives spoilers, updates and news.