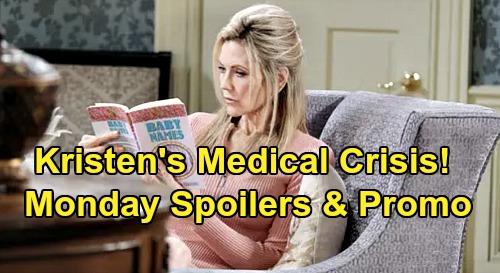 Days of Our Lives (DOOL) spoilers for Monday, October 21, tease that Jack Deveraux (Matthew Ashford) will make an emotional plea. He’ll go to Eve Donovan (Kassie DePaiva) and make a pitch for his freedom, but she’ll put up a fight on signing the divorce papers. However, Jack adores Jennifer Horton (Melissa Reeves) and is ready to start their new chapter. He’ll keep begging until Eve ultimately relents and makes him the happiest man alive.

Jack will propose to Jennifer later this week, but Jenn will have something to keep her busy in the meantime. DOOL fans know Kayla Johnson (Mary Beth Evans) handed over Dr. Wilhelm Rolf’s (William Utay) flash drive, so Jennifer will grow curious on Monday. Days of Our Lives spoilers say Jennifer will try to access what’s on it and see what secrets Dr. Rolf might be keeping.

Over with Xander Cook (Paul Telfer), he’ll point out that he’s doing Sarah Horton (Linsey Godfrey) a favor. Xander will hope Sarah’s willing to do one for him in return. There’s no word on what Xander might want, but a date might be an option. Then again, Xander may have some other request in mind. Whatever he asks for will probably pull Sarah closer, so we’ll see how long she can resist the reformed bad boy.

Other Days of Our Lives spoilers say Kristen DiMera (Stacy Haiduk) will face sudden pain. Brady Black (Eric Martsolf) will remain right by Kristen’s side as she deals with a shocking medical crisis. They’ll both worry about their unborn child, but it looks like everything will check out OK. It’ll actually turn into a happy moment as Brady and Kristen listen to their baby’s heartbeat.

This will all become quite real for Brady, who’ll bond with Kristen and continue to soften toward her. Kristen has made some serious mistakes, but Brady just can’t help himself. He finds Kristen irresistible anyway, but this whole baby thing is pushing over the edge. Days spoilers say Brady may regret letting Kristen reel him back in, but he’ll be caught up in the excitement for now.

It sounds like some great scenes are ahead on the NBC soap. We’ll give you updates as other Days news comes in. Stay tuned to DOOL and don’t forget to check CDL often for the latest Days of Our Lives spoilers, updates and news.