Days of Our Lives Spoilers: New Serial Killer Story For May Sweeps – Who Will Be Salem’s Next Murderer? 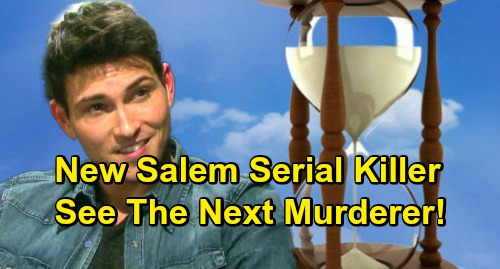 Days of Our Lives (DOOL) spoilers tease that a big story is set to kick off this spring. It’s been over three years since Salem’s seen any serial killings, and those killings were perpetrated by Ben Weston (Robert Scott Wilson) after he suffered a psychotic break. But a lot can change in three years. Now Ben’s back, mentally stable, and trying to live a normal life.

Salem has been relatively murder-free lately, with the exception of Andre DiMera’s (Thaao Penghlis) death, which was eventually ruled a justified killing in self-defense. Abigail (then Marci Miller) had no choice but to wallop Andre upside the head when he attacked her first.

But now Days of Our Lives spoilers say that Salem will once again become home to a serial killer, starting during May sweeps 2019. And let’s just say the obvious…of course Ben will be everyone’s first suspect. Ben was the “necktie killer” back in 2015 and Hope Hernandez (Kristian Alfonso) will surely look hard at Ben as a suspect before she considers anyone else.

But surely it won’t be that easy. Serial killer stories always seem to have a false lead or two, then culminate in a surprise killer suddenly being revealed. So who are some possible culprits?

Well, there’s always Andre, who we know was one of the mystery patients at the DiMera warehouse in Nashville. The initials “A.D.” were posted clearly on one of the patient rooms, so it seems that Andre may still be alive.

If Andre’s indeed alive, then he’s definitely serial killer material. He’s was the Salem Stalker back in 2003-2004, so we know he’s capable of doing horrible things to people. And who knows what sort of effect Dr. Wilhelm Rolf’s (William Utay) treatments had on him, since they seem to affect everyone differently. They could have caused him to take on a murderous persona.

And then there’s another criminal who could feasibly make a Salem comeback, and that’s Clyde Weston (James Read). Days buzz is that Clyde’s story hasn’t completely been told yet, so we may see him back on canvas in the coming year.

If that’s the case, he’d certainly be a believable serial killer. He was an abusive dad to Ben growing up, so he’s got it in him to do some despicable deeds.

Of course, there’s always the possibility that a new killer will emerge, or it will be someone totally surprising who’s never killed before. Serial killer mysteries generally take a few twists and turns, so you never know who it might be.

What do you think of upcoming serial killer story? And who do you think the killer will be? Stay tuned to DOOL and don’t forget to check CDL often for the latest Days of Our Lives spoilers, updates, and news.