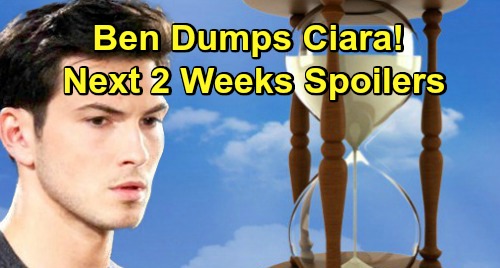 Days of Our Lives (DOOL) spoilers for the next two weeks tease that several Salemites will land in tight spots. During the week of February 18-22, Leo Starke (Greg Rikaart) will fight back over Gabi Hernandez’s (Camila Banus) torture tactics. He’ll blame Will Horton (Chandler Massey) and Sonny Kiriakis (Freddie Smith), so it won’t be long until the cops arrive at the Kiriakis mansion.

Leo will implicate Will and Sonny enough to get them taken to the police station. They’ll get grilled while Diana Cooper (Judith Chapman) adds to John Black (Drake Hogestyn) and Dr. Marlena Evans’ (Deidre Hall) misery. Diana’s manipulation will leave them exasperated, so they’ll realize Leo isn’t the only problem they have to deal with.

Other Days of Our Lives spoilers state that Chad DiMera (Billy Flynn) will pop the question again. He’ll ask Abigail Deveraux (Kate Mansi) to marry him once more, so they’ll stand up in front of their loved ones and say their vows. After a tearful farewell to their family and friends, Chad and Abigail will leave for a fresh start in Paris.

Over with Jordan Ridgeway (Chrishell Hartley), she’ll lose the battle to end Ben Weston’s (Robert Scott Wilson) life. After Ciara Brady (Victoria Konefal) saves Ben, he’ll have to save Ciara! Once they’re both out of danger, Jordan will be questioned by Rafe Hernandez (Galen Gering) at the police station.

DOOL viewers will learn the identify of the fire-setter, so Jordan may be to blame unless Days throws in a twist. Regardless, Jordan will warn Ben that he’s just like his evil father, Clyde Weston (James Read). As she’s hauled away to Bayview, Jordan will contend that Ben needs to steer clear of Ciara or else he’ll he’s going to hurt her.

During the week of February 25-March 1, Ben will have Jordan’s warning on his mind. He’ll worry that she’s right about his dark side. Ben will hate to do it, but he’ll decide he has to dump Ciara. He’ll break her heart in hopes of saving her from his potential wrath. Ben just won’t want to fly off the handle one day and do something they’ll both regret.

Elsewhere, Diana will seek a deal with Victor Kiriakis (John Aniston). If Victor wants Leo out of the family, he’ll have to form an alliance with Diana. Victor indeed wants that, so he’ll be willing to do whatever he has to do.

Later, John will catch Marlena off guard. He’ll end up defending Leo, so Marlena will have to wonder why. What she doesn’t know is that John believes Leo is his son. Of course, that revelation probably wasn’t true since John just took shady Diana’s word for it.

Days of Our Lives spoilers state that Eve Donovan (Kassie DePaiva) will pull off a political maneuver for Jack Deveraux (Matthew Ashford). It looks like Haley Chen’s (Thia Megia) secret will come out publicly, so Jennifer Horton (Melissa Reeves) will rip into Jack and Eve. She’ll argue that Jack betrayed JJ Deveraux (Casey Moss) and used Haley as a pawn in his mayoral campaign.

Next, Sarah Horton (Linsey Godfrey) will have a hot dream about Eric Brady (Greg Vaughan). Her desires will grow stronger and so will Eric’s. Days fans will be eager to see how long they can hold out. Finally, Claire Brady’s (Olivia Rose Keegan) jewelry box will contain something surprising. After Tripp Dalton (Lucas Adams) stumbles upon it, he’ll demand an explanation.

Days spoilers say some shocking moments are coming up on the NBC soap. We’ll give you updates as other news comes in. Stay tuned to DOOL and don’t forget to check CDL often for the latest Days of Our Lives spoilers, updates and news.