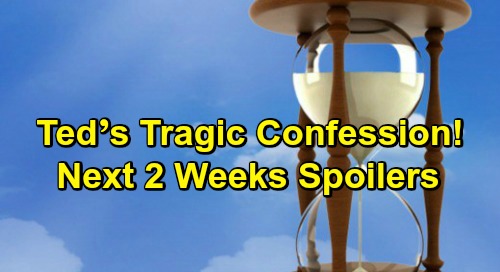 Days of Our Lives (DOOL) spoilers for the next two weeks tease that some Salem shockers are in store. During the week of June 3-7, Claire Brady (Olivia Rose Keegan) will worry about the threat Ben Weston (Robert Scott Wilson) and Ciara Brady (Victoria Konefal) pose. She’ll overhear them talking and realize they’re onto her, so she’ll call Eve Deveraux (Kassie DePaiva) and beg for some help.

Claire will get voicemail at first, but Eve will eventually call back and remind Claire that they’ve got a plan. She’ll instruct Claire to pass along the lighter so she can frame Ben for the cabin fire. Claire will have no qualms about that since she doesn’t have any other option at this point. She’ll just want to stay out of prison, but things will change soon enough.

Nearby, Ben will ponder Claire’s ringtone after she takes off. Days of Our Lives spoilers say he’ll think it seems awfully familiar. Ben will ultimately recall it as the music heard outside the cabin, so he’ll dash off to find Claire before she comes unhinged again.

Meanwhile, Claire will decide she could use a therapy session with Dr. Marlena Evans (Deidre Hall). Claire will almost confess to setting the fire, but a phone call from Tripp Dalton (Lucas Adams) will change her mind. Tripp will fib about going to see Steve Johnson (Stephen Nichols), so hearing Tripp’s voice should remind Claire of what’s at stake. She’ll still hope for a reunion.

Days of Our Lives spoilers say Claire’s rage will erupt when she spots Tripp with Haley Chen (Thia Megia) at the Horton cabin. Due to Tripp’s earlier lie and everything he’s done for Haley, Claire will assume they’re running away together. She’ll end up torching the place with Haley and Tripp inside, so an urgent rescue should begin before long.

During the week of June 10-14, Ben’s timing will be horrible. Eve will follow through on her plot to frame Ben for the fire, so she may try to pin the latest one him, too. Days of Our Lives spoilers say Ben will protest, but he’ll be arrested anyway.

Elsewhere, Rafe Hernandez (Galen Gering) will try to set some boundaries with Lani Price (Sal Stowers). It looks like Rafe may be uncomfortable after Lani plants a kiss, so he’ll want to get a few things straight. At DiMera Enterprises, Stefan DiMera (Brandon Barash) will hire a couple of new Salemites. One may be Abe Carver (James Reynolds) – but he’ll have to accept Stefan’s offer first.

“Nicole Walker” (Arianne Zucker) aka Kristen DiMera (Stacy Haiduk) will also seek a job there, so Stefan will give this fake grieving mom one to ease her pain and help her move on. Over with Xander Cook (Paul Telfer), he’ll pretend he’s all about saving the day. This probably involves handing over Dr. Wilhelm Rolf’s (William Utay) diary and making Dr. Sarah Horton (Linsey Godfrey) think he’s a hero.

However, that plan’s destined to fail and so is Ted Laurent’s (Gilles Marini). Days of Our Lives spoilers say Ted will come up with a way to prove himself to Hope Hernandzez (Kristian Alfonso), but it’ll be awfully risky. The trouble will start when Ted divulges something huge to “Nicole.”

Ted may tell her that Holly Jonas (Harlow and Scarlett Mallory) is still alive, which isn’t good news since “Nicole” is actually Kristen – the secret partner Ted was left in the dark on. DOOL spoilers reveal that Ted will vanish this summer, so Kristen may be behind that. If Ted betrays her trust, she’ll have every reason to make him disappear.

Days spoilers state that the show will be preempted on June 6 and June 7, but the next week will be a full one as usual. It sounds like the action’s about to rev up in Salem. We’ll give you updates as other Days news comes in. Stay tuned to DOOL and don’t forget to check CDL often for the latest Days of Our Lives spoilers, updates and news.