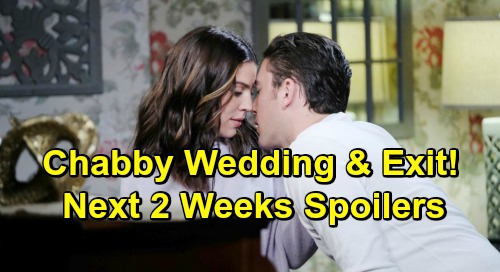 Days of Our Lives (DOOL) spoilers for the next two weeks tease that some bold moves are coming up. During the week of February 11-15, Ben Weston (Robert Scott Wilson) will be forced to take drastic action. After Jordan Ridgeway (Chrishell Hartley) plants proof to frame him for the kidnappings, Ben will be arrested and taken to the police station. That’s where Ben will wrestle Eli Grant’s (Lamon Archey) gun away from him.

Ben will use that gun to make Hope Hernandez (Kristian Alfonso) leave the Salem PD, but she won’t exactly be cooperative. DOOL fans know Hope is always convinced Ben’s guilty. She won’t buy his seemingly crazy idea that Jordan is responsible. Nevertheless, Ben will stick to his plan to save Ciara. He’ll go to Chad DiMera (Billy Flynn) for help, so they’ll ultimately rush to the cabin. 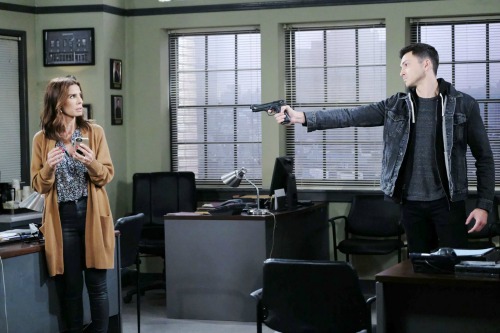 Days of Our Lives spoilers say Ben will pull Ciara out of the fire Jordan set. However, Jordan will get sneaky at the hospital later. She’ll creep in Ciara’s room with a syringe, so that can’t be good! It looks like Jordan will try to kill Ciara, but Ben will burst in to rescue Ciara once more.

Other Days spoilers state that Rex Brady (Kyle Lowder) will run into Jordan eventually. He’ll notice a large scar just below her ear when she’s fixing her hair. Rex will question Jordan about it, so she’ll likely open up a bit. This car may go all the way back to the car accident that Jordan inadvertently caused.

Jordan’s pregnant mom died, so that trauma may be part of why she’s so unhinged now. Maybe it finally caught up with her. Of course, Jordan was also beaten and raped by her stepfather, Clyde Weston (James Read). There’s plenty of pain in her past that undoubtedly drove her to this.

Kate Roberts (Lauren Koslow) will also become Jordan’s victim when she’s drugged and left to die. After Rafe Hernandez (Galen Gering) saves Kate, the situation will still be awfully troubling. Rafe will grow increasingly concerned after Kate flatlines, but she’ll pull through in the end. 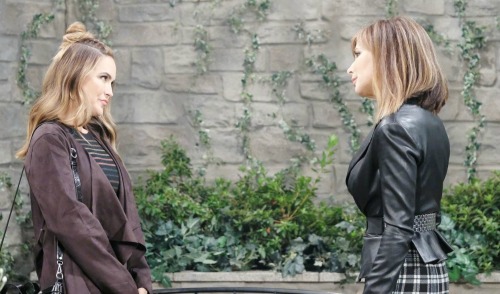 During the week of February 18-22, Chad and Abigail Deveraux (Kate Mansi) will get their relationship back on track. Abigail’s forgiveness will mean the world to Chad, so they’ll make love and consider their future together. Charlotte will be safe and sound by then, but her abduction was a real wakeup call. Abigail and Chad just won’t want to waste another moment without each other.

Days spoilers say Chad and Abigail will remarry before they depart with the kids on February 21, so don’t miss the “Chabby” family sendoff. Across town, Ciara will turn the tables on Jordan and come to Ben’s rescue. She’ll save Ben’s life, but he’ll be rattled by the vicious showdown with his sister. Ben will feel like he could’ve killed Jordan if he’d let himself. He’ll worry about his dark side, but Ciara will offer reassurance.

Afterward, Jordan will unleash all her pain and anger. She’ll lean on Rafe for support as she tries to work through her disturbing history. Once Stefan DiMera (Tyler Christopher) receives word that Abigail’s gone, he’ll have a major meltdown. A little piece of Stefan was holding out how that “Gabby” would still come back to him. Stefan will just have to accept that’s not the case, but he’ll definitely struggle.

Elsewhere, Eve Donovan (Kassie DePaiva) will do some eavesdropping. She’ll listen in on Haley Chen’s (Thia Megia) fight with Melinda Trask (Laura Kai Chen), so she’ll have even more ammunition to work with. Eve will be eager to blow up Melinda’s campaign and boost Jack Deveraux’s (Matthew Ashford) chances of victory.

It sounds like the next two weeks will bring some hot drama. We’ll give you updates as other Days of Our Lives news comes in. Stay tuned to DOOL and don’t forget to check CDL often for the latest Days of Our Lives spoilers, updates and news.