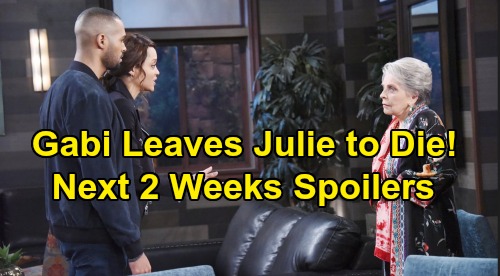 Days of Our Lives (DOOL) spoilers for the next two weeks tease that some major revelations are ahead. During the week of August 26-30, some big news will spread across Salem. Holly Jonas (Harlow and Scarlett Mallory) and Nicole Walker (Arianne Zucker) are both alive, so that’ll throw Brady Black (Eric Martsolf) for a loop. He’ll hear Kristen DiMera’s (Stacy Haiduk) confession and push for details.

Kristen will suggest she’d love to offer those details, but only in exchange for a deal. She’ll want to walk free out of that police station, but she’s going to face a fierce fight on this. Eric Brady (Greg Vaughan), Maggie Kiriakis (Suzanne Rogers) and Sarah Horton (Linsey Godfrey) will also get updates on the Nicole and Holly situation. It turns out it’s quite a story.

Nicole knew all about Kristen’s plan to head back to Salem and assume her identity. She was willing to allow it because her daughter was safely returned to her. Nicole had to put Holly first, so we can’t blame her for that.

Days spoilers say Eric will head off on a mission to find Nicole and Holly in Chicago. Jennifer Horton (Melissa Reeves) and Jack Deveraux (Matthew Ashford) will be on hand as well, but they’ll make a different kind of discovery. Speaking of discoveries, Gabi DiMera (Camila Banus) will make one after declaring her love to Stefan DiMera (Brandon Barash) and gaining her freedom.

Julie Williams (Susan Seaforth Hayes) will have a troubling issue with her heart, so she’ll collapse in the park. DOOL fans know Gabi and Julie are bitter enemies, so Gabi will opt to just leave Julie there. She’ll get put on blast when Eli Grant (Lamon Archer) learns Gabi left his grandma to die!

Fortunately, Ben Weston (Robert Scott Wilson) and Ciara Brady (Victoria Konefal) will happen to stroll by during the week of September 2-6. They’ll come to Julie’s rescue and get her to the hospital ASAP. Over with Eric, he’ll be stunned when he locates Vivian Alamain (Robin Strasser). Days spoilers state that the unlikely duo will face a risky ordeal.

Stefan will also be floored to receive a call, so that’ll likely involve his mother’ survival. They’ll share a heartfelt reunion soon enough. Back with Ben, more trouble is headed his way. Victor Kiriakis (John Aniston) will be fed up Ben and Ciara’s relationship, so he’ll decide to end it once and for all. He’ll need a little help to make that happen, so he’ll deliver deadly orders to Xander.

Of course, Xander will wonder what’s in it for him. Vic may suggest Xander will be handsomely rewarded, but Xander will already be on thin ice. He may not be eager to take another round of risks and turn Sarah against him even more. Regardless, Days of Our Lives spoilers say Xander will skip this murder.

It sounds like the next two weeks will be packed with action. We’ll keep you posted as other Days details emerge. Stay tuned to DOOL and don’t forget to check CDL often for the latest Days of Our Lives spoilers, updates and news.