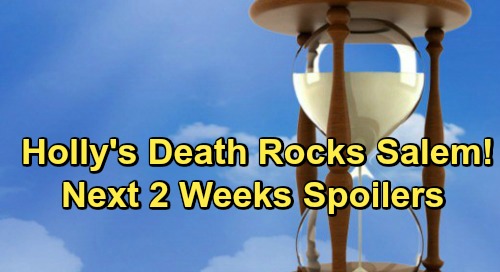 Days of Our Lives (DOOL) spoilers for the next two weeks tease that chaos will erupt in Salem. During the week of April 29-May 3, some major returns will bring serious drama. Valerie Grant (Vanessa Williams) will decide to put a little more effort into her long-distance romance with Abe Carver (James Reynolds). She’ll want to support him at his debate, so she’ll surprise him by coming back to town.

Unfortunately, Abe will have a secret by then. He’ll consider the possibility of a romance with Sheila Watkins (Tionne “T-Boz” Watkins), which will lead to a kiss that’s caught on camera. Abe and Sheila will find the kiss spark-less, so they’ll agree to skip taking things further than friendship. However, Jack Deveraux (Matthew Ashford) will paint a very different picture when he publicly exposes the photo.

Days of Our Lives spoilers say Valerie and Abe will split soon after. DOOL fans can expect Sheila to leave Salem behind as well. As for Abe’s campaign, he’ll have a giant hole to climb out of if he wants to win voters back.

Meanwhile, Xander Cook (Paul Telfer) will be revealed as the masked man behind Holly Jonas’ (Harlow and Scarlett Mallory) kidnapping. Ted Laurent (Gilles Marini) recruited Xander for a mutually beneficial mission, but their plan will have some dire consequences.

Over with Nicole, she’ll blast Chloe Lane (Nadia Bjorlin) for letting this happen. Nicole will be a frantic mess over her missing little girl.

Dr. Sarah Horton’s (Linsey Godfrey) dream of a future with Eric Brady (Greg Vaughan) will go up in smoke, so she’ll privately lose it over “Ericole’s” reunion. However, happy soap couples rarely stay that way for long and this kidnapping is proof.

Days spoilers say Nicole, Eric and Hope will rush to the sight of a catastrophic accident. It won’t be long until they discover something utterly heartbreaking. Thanks to a terrible chain reaction that started with the kidnapping and ends with Rafe going rogue, it sounds like Holly will be dead. Hope will also face backlash since she’ll be in charge of the rescue mission and the buck stops with her.

Later, Hope and Rafe’s marriage will blow up like never before. Over with Ciara Brady (Victoria Konefal) and Ben Weston (Robert Scott Wilson), they’ll have to break this horrific news to Chloe and Stefan DiMera (Brandon Barash). Whether Days of Our Lives ever brings Holly back from the dead or not, this tragedy will bring great distress and affect many couples on canvas.

On a happier note, John Black (Drake Hogestyn) and Dr. Marlena Evans (Deidre Hall) will have something to celebrate. They’ll come together for their six-month wedding anniversary, so at least a tiny bit of joy will be mixed in with all the doom and gloom. Days of Our Lives spoilers say Marlena and John’s love story will continue moving in the right direction.

The next two weeks are sure to bring some gripping episodes. We’ll give you updates as other Days details emerge. Stay tuned to DOOL and don’t forget to check CDL often for the latest Days of Our Lives spoilers, updates and news.